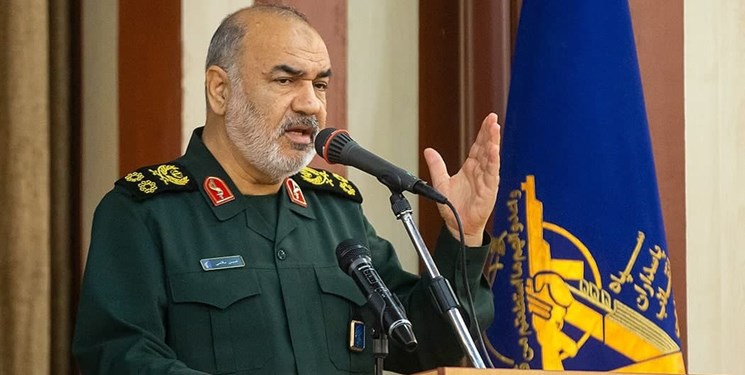 TEHRAN (FNA)- Commander of the Islamic Revolution Guards Corps (IRGC) Major General Hossein Salami said on Tuesday that the enemy has been defeated in wars waged against the different regional states as well as the maximum pressure policy against the Iranian nation.

The Iranian nation managed to overcome difficult times thanks to the great efforts that the people made and their presence when they were needed, General Salami said, addressing a group of Basij (volunteer) forces in Tehran.

He pointed to the cultural and economic war that the enemy is waging against the Iranian nation, and said, "The enemy came and surrounded us to close the doors of the world to us and deprive us of science and knowledge, and to pursue this issue seriously by assassinating our scientists."

General Salami added that the enemies sought to frustrate the Iranian people but "you the people have defeated them (the enemies)".

"With lies and media warfare, the enemies sought to isolate Iran from the rest of the world, to make the country insecure, to put the people against the Islamic Republic, and to destroy their trust in the Islamic Republic, but the people have thwarted all their plots with their faith, which was a great thing and this battle continues, all routes of influence are closed to the enemy in a proxy and direct war."

"The enemy has been defeated in Iraq, Syria, Yemen and Afghanistan, and it has failed in an economic war and maximum pressure campaign, so we should thank God for having such a brave and courageous nation," General Salami said.

"When the people are on the scene, all problems are solved and there would be no problem that could not be solved," he underlined.

Iranian President Seyed Ebrahim Rayeesi said on Monday that Iran’s foreign trade recorded 100 billion dollars in worth during the past Iranian calendar year (ended on March 20, 2022).

President Rayeesi said on Monday foreign trade has touched the $100-billion milestone which is "a completely different figure from the past".

He added that Iran is no longer worried about its oil sales which are twice as much oil as when he took office in August, despite heavy sanctions imposed by the US.

"With the 13th government in power, oil sales have doubled and there is no longer any concern about oil sales,” Rayeesi said.

He also said initial concerns about the strategic stocks of essential consumer goods have eased.

"Today, concerns about protecting the lives of the people against the outbreak of the coronavirus, stocks of basic goods, foreign exchange, foreign trade as well as oil sales have been resolved to an acceptable extent," the president said.

He said the government seeks to reform the subsidy program for basic goods and phase out an "unfair" allocation of funds and distribution of foreign exchange at concessionary rates.

"From the very first days of the government, almost all economists and experts warned us that we should think of a solution to the serious problems of the country.”

Rayeesi touched on the reopening of businesses and schools after a successful vaccination campaign, saying that "today, in addition to importing vaccines, we also have a very high capacity to produce vaccines in the country and even export them”.

The president said his government's measures have brought down the number of daily deaths from the coronavirus pandemic to 7 from 700.