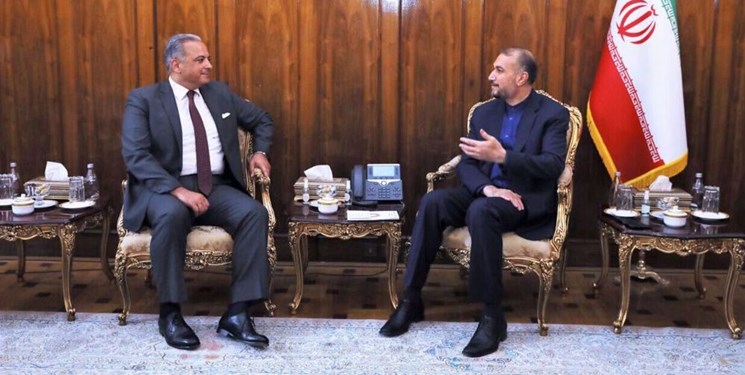 TEHRAN (FNA)- Iranian Foreign Minister Hossein Amir Abdollahian said that his country attaches special importance to Lebanon in its foreign policy, and called for the further expansion of bilateral ties in all fields.

Amir Abdollahian made the remarks in a meeting with Lebanon's Culture Minister Mohammad Wissam al-Mortada in Tehran on Wednesday.

During the meeting, the two ministers discussed the latest developments in the region, promotion of relations among the Islamic countries and especially development of cooperation between the two countries.

Amir Abdollahian touched on the special place of Lebanon in Iran's foreign policy and the age-old and good relations between the Iranian nation and all Lebanese groups and tribes.

He called the resistance of the Lebanese people against the continuous aggression of the Zionist regime a shining example for the nations of the region.

"Therefore, the resilient people of the region will never go under the burden of normalization with the terrorist and child-killing Israeli regime," Amir Abdollahian added.

He also referred to the difficult economic situation in Lebanon amid oppressive western sanctions on the country, reiterating Tehran's readiness to upgrade economic cooperation with Beirut if demanded by the Lebanese government and people.

Al-Mortada, for his part, hailed Iran's special place in the West Asian region, saying Beirut is ready to expand its relations with all friendly and brotherly regional countries, specially the Islamic Republic.

He touched on problems related to the livelihood and basic needs of the Lebanese people, stressing that the Lebanese government and nation, nonetheless, will act in the national interests of their country and will never wait for outside help or solutions.

Western countries, led by the US, have targeted the Lebanese economy with draconian sanctions with the aim of pressuring the government in Beirut to ostracize Hezbollah and cut it from the country's political and military landscape.

The resistance movement is a nemesis of the West and Israel for inflicting repeated defeats on their regional schemes, especially during two recent wars which shattered Tel Aviv's myth of invincibility.

Iran began to send fuel to Lebanon in August through the Lebanese resistance group Hezbollah, which announced the purchase of Iranian fuel shipments after the Lebanese government’s failure to deal with the country’s crippling fuel shortages.

The tankers carrying Iranian fuel were sent to Syria to be transferred to neighboring Lebanon, while Tehran has expressed readiness to sell its fuel directly to the Lebanese government.