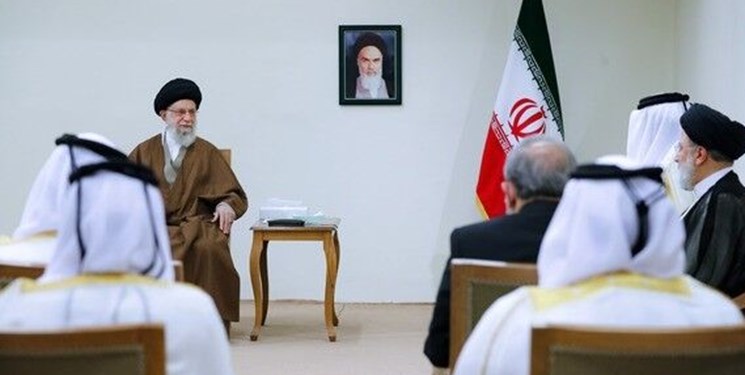 During the meeting, the Supreme Leader emphasized increasing political and economic cooperation between Iran and Qatar.

Referring to the fact that the solution to the regional issues is holding dialogues without foreign intervention, the Supreme Leader said "the Arab World was expected to enter the political action field against the obvious crimes committed by the Zionist Regime against the Palestinian people".

He said that the strength and sustainability of relations between Iran and Qatar is in the interest of both countries, adding that the current level of economic relationship was low and should be multiplied.

Ayatollah Khamenei expressed the hope that the Qatari Emir’s visit of Tehran would be a new starting point for expansion of cooperation between the two states.

He lauded Sheikh Tamim’s condemnation of the crimes committed by the Israeli  Regime, and underlined that "the decades-long oppression by the devil Zionists against the Palestinian people was a bitter reality and a blow to the Muslims and the Arab world".

The support from some Arab states for the Palestinian people in the last year incident in Sheikh Jarrah neighborhood in Holy Quds didn’t even match the Europeans’ support.

The region didn’t need foreign intervention for management, the Supreme Leader underscored, adding that "the Zionists cause corruption everywhere they go and they cannot provide power or advantage for countries".

He also urged the implementation of the agreements made between Iran and Qatar with a specific timing.

The Qatari Emir, for his part, highlighted the Supreme Leader’s status in the Muslim World, and said that the crime committed by the Israeli regime in Palestine were tragic and everyone should stand against them.

He expressed regret over the killing of a female journalist in Jenin by the Israeli military forces.

Sheikh Tamim said that the solution to the issues of the countries in the region, including Syria, Iraq and Yemen, was through dialogue.

The Qatari Emir arrived in Tehran on at the head of a high-profile political and economic delegation. He has also met with Iranian President Seyed Ebrahim Rayeesi.

Qatar has good ties with Iran, with which it shares a giant gas field.

Tehran stood by Doha after Saudi Arabia and its Arab allies imposed a boycott on Qatar in mid-2017.

One option under discussion is the use of Iranian hotels on Kish Island, a thirty-five-minute flight from Doha to make up for Qatar’s limited hotel capacity.