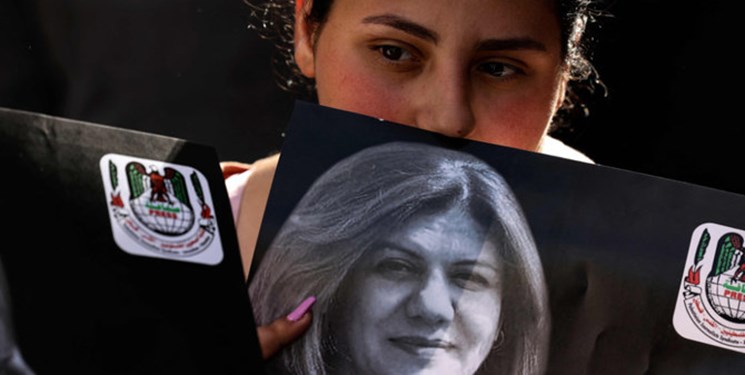 TEHRAN (FNA)- UN human rights experts condemned the killing of Al-Jazeera journalist, Shireen Abu Akleh, in the occupied West Bank and called for a prompt, transparent, thorough, and independent investigation into her death.

They stated, “The killing of Abu Akleh, who was clearly performing her duties as a journalist, may constitute a war crime", WAFA news agency reported.

“The killing of Abu Akleh is another serious attack on media freedom and freedom of expression, amid the escalation of violence in the occupied West Bank,” added the experts.

“We demand a prompt, independent, impartial, effective, thorough, and transparent investigation into the killing of Shireen Abu Akleh, in full compliance with the Revised United Nations Manual on the Effective Prevention and Investigation of Extra-Legal, Arbitrary and Summary Executions (The Minnesota Protocol on the Investigation of Potentially Unlawful Death). We urge the Israeli and Palestinian authorities and other stakeholders to cooperate with such an investigation,” they noted.

Shireen Abu Akleh was shot dead on May 11 near the entrance to Jenin refugee camp, while reporting on a raid in Jenin conducted by the Israeli forces. Abu Akleh and other journalists present in the area wore protective gear clearly identifying them as media workers.

“Authorities have an obligation not to harm journalists and to protect them from harm under international humanitarian law and international human rights law,” the experts said, adding, “The killing of Abu Akleh, who was clearly performing her duties as a journalist, may constitute a war crime.”

The targeting of journalists working in the occupied Palestinian territory and the Israeli authorities’ failure to properly investigate killings of media personnel also violate the rights to life and effective remedies, the experts stressed. The International Federation of Journalists has filed a formal submission to the ICC on the systematic targeting of journalists in the occupied Palestinian territory: Abu Akleh’s killing should be part of the ongoing investigation.

“The role of journalists, especially in a context of heightened tension and marked by continuous abuses, like the occupied Palestinian territory, is critical,” they continued.

“Lack of accountability gives carte blanche to continue the litany of extrajudicial executions. The safety of journalists is essential in guaranteeing freedom of expression and media freedom,” they added.

“The unsustainable situation is inherent to the context of protracted military occupation, in which violence and repression are used to perpetuate a system of Palestinian subjugation,” said the experts.

“This is a political reality that requires firm action based on accountability and general compliance with international law. This must commence with the dismantlement of the occupation, including the Gaza blockade and the illegal settlements in the West Bank and East Jerusalem,” they announced.