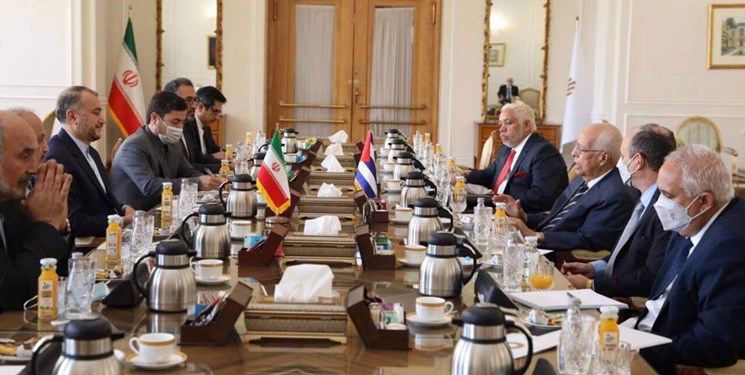 Amir Abdollahian made the remarks in a meeting with Cuban Deputy Prime Minister Ricardo Cabrisas Ruiz in Tehran on Saturday.

Cabrisas Ruiz is in Tehran to take part in the 18th session of the Iran-Cuba joint economic committee.

He described Cuba as a strategic partner for Iran, and called for the expansion of mutual cooperation in various fields.

Amir Abdollahian said the joint economic committee would provide the two countries with an opportunity to discuss ways to enhance economic and trade relations and political cooperation.

Tehran and Havana also enjoy a proper level of cooperation in the sector of health and treatment, particularly the joint production of COVID-19 vaccine, he said, adding that the Iranian administration is determined to implement previous agreements and sign new contracts with Cuba.

Cabrisas Ruiz, for his part, hailed Iran's constant support for Cuba in the face of the US sanctions.

Iranian Deputy Foreign Minister for Economic Diplomacy Mehdi Safari announced on Wednesday that the 18th Iran-Cuba Joint Economic Commission will be held in Tehran on May 15-17, 2022.

He added that Ruiz is to visit Tehran at the head of an economic delegation in line with efforts to enhance bilateral relations between the two countries.

B2B (business-to-business) meetings are also scheduled to be held between the main Iranian and Cuban companies on the sidelines of the Commission, Safari said.

Some 21 technical committees in different areas, including trade, investment, transit and transportation, electricity and energy, oil and gas, customs, banking and finance, health and so on are to convene as part of the Commission in Tehran.

The commission is to be co-chaired by Iranian minister of health and the Cuban deputy prime minister.