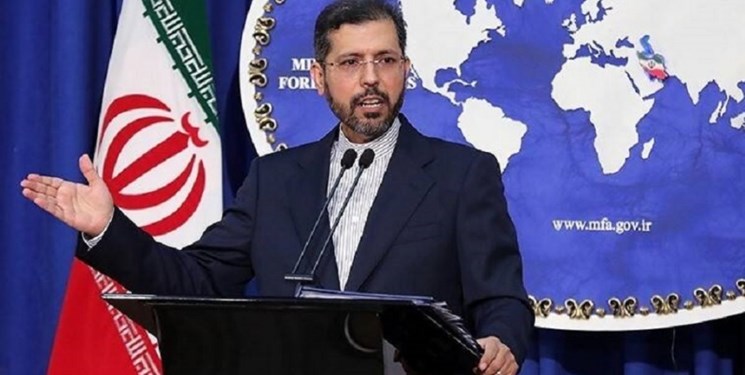 Asadollah Assadi's diplomatic immunity has been violated and he is kept under poor and inadequate conditions, Khatibzadeh told reporters in Tehran on Monday.

It is regrettable that diplomatic rights are violated by European Union countries (Germany and Belgium), he said, adding that Iran has been following up the case as it believes that total procedure of arresting, holding court session, and issuing verdict was illegitimate.

Elsewhere, Khatibzadeh referred to the recent developments in the neighboring country of Afghanistan, and said that the ruling government in Afghanistan is responsible for providing security and not letting terrorist groups be a threat for the neighbors.

He also declared Iranian Foreign Minister Hossein Amir Abdollahian's visit to the UAE to offer condolences over demise of Sheikh Khalifa bin Zayed Al Nahyan, the president of UAE who died at the age of 73, and wished a better future for that regional country.

In relevant remarks earlier this month, Khatibzadeh condemned imprisonment of an Iranian diplomat in Belgium on false "terror-related" charges, and called for his immediate release.

"The process of detention and trial of Asadollah Assadi has been flawed and in violation of the 1961 Vienna Convention on Diplomatic Relations," Khatibzadeh said.

"The European parties involved in the case of Asadollah Assadi have been called to account," he added.

The Iranian foreign ministry's remarks came after an appellate court rejected appeal requests submitted by three people, whom are said, in line with “unfounded and baseless accusations,” to have been “connected” to Assadi.

"Unfortunately, today, under the pretext of holding appeals court for the three foregoing people, we are once again witnessing fabricated lies by Western media about Mr. Assadi, a diplomat of the Islamic Republic of Iran," he added.

Khatibzadeh pointed out that as said in the past, the entire procedures of detention, trial, and issuance of legal verdict against Assadi have taken place in complete violation of the Vienna Convention on Diplomatic Relations.

The Islamic Republic has officially communicated its protest over the matter to Austria, Germany, and Belgium, repeatedly rejecting the accusations that have been leveled against the diplomat, and insisting that he should be “immediately released", the Iranian foreign ministry spokesman said.

He called the whole issue a preplanned scenario which has been acted by the MKO with the goal of Iranophobia.

In June 2018, Belgian authorities said that the Belgian police had intercepted a car carrying homemade explosives and a detonation device, claiming that Assadollah Assadi had handed the materials to two people in Belgium earlier. Assadi, himself, was apprehended in Germany the next day and told that he could not apply his diplomatic immunity.

A Belgian court then sentenced the diplomat, who serves as the third counselor at Iran's Embassy in Vienna, to 20 years in prison after accusing him of plotting an alleged attack against the anti-Iran Mujahedin-e-Khalq (MKO) terrorist group.