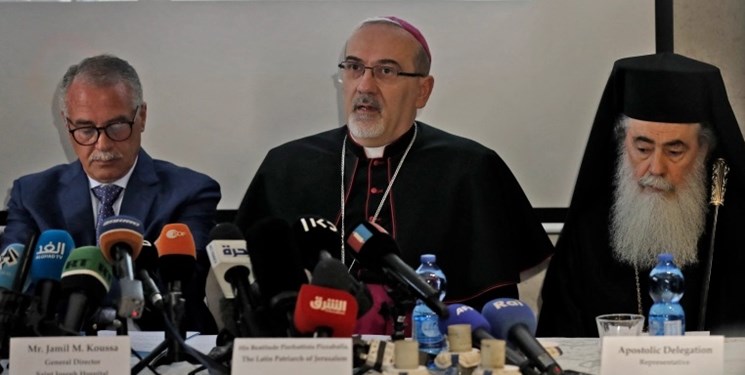 Latin Patriarch Pierbattista Pizzaballa told reporters on Monday at St Joseph Hospital that the incident, broadcast around the world, was a “disproportionate use of force” against the Palestinian flag-waving crowd of thousands proceeding from the hospital to a nearby Catholic church in Jerusalem’s Old City, Al-Jazeera reported.

The police attack, Pizzaballa told reporters, “is a severe violation of international norms and regulations, including the fundamental human right of freedom of religion, which must be observed also in a public space”.

St Joseph Hospital also released security camera footage that showed Israeli forces storming the building where Abu Akleh’s body had been lying, and said 13 people were injured as a result of the raid.

Al-Jazeera’s Imran Khan said the hospital, along with church authorities, are going to take legal action against Israeli authorities for what happened.

“The anger here is palpable,” Khan said, speaking from the hospital’s entrance.

“We heard from the director general [of the hospital] saying that in his 31 years, he’s never seen anything like it,” Khan added.

“Hospital authorities say there was absolutely no reason for [Israeli forces] to have gone inside,” he continued, adding that the three key words used to describe the actions of the forces are disgraceful, disrespect, and disproportionate use of violence.

The attack on Friday drew worldwide condemnation and added to the shock and outrage towards Abu Akleh’s killing as she covered an Israeli raid in the occupied West Bank.

Abu Akleh, a Palestinian American associated with Al-Jazeera for 25 years, was killed while covering an Israeli military raid in the Jenin refugee camp. She was a household name across the Arab world, known for documenting the hardship of Palestinian life under Israeli rule.

Witnesses, including journalists who were with her, Palestinian officials, and Al-Jazeera say she was killed by Israeli army fire.

The military, after initially saying Palestinian gunmen might have been responsible, later backtracked and now says it is not clear who fired the deadly bullet. But according to Israeli daily Haaretz, Israeli authorities interrogated the soldier believed to have fired the bullet, who said he was sitting in an army vehicle 190 metres away and “didn’t see” Abu Akleh.

After an international uproar over the funeral violence, Israeli police launched an investigation into the conduct of the officers who attacked the mourners, causing the pallbearers to nearly drop her coffin.

But Abu Akleh’s brother, Anton, told Al-Jazeera there is no hope in holding out for an independent investigation.

Israel has called for a joint investigation with the Palestinians, saying the bullet must be analysed by ballistics experts to reach a firm conclusion. Palestinian officials have refused, saying they do not trust Israel.

Human rights groups say Israel has a poor record of investigating wrongdoing by its security forces.

After earlier saying they would accept an outside partner, the Palestinians said late on Sunday that they would handle the investigation alone and deliver results very soon.

“We also refused to have an international investigation because we trust our capabilities as a security institution,” Prime Minister Mohammed Shtayyeh announced.

“We will not hand over any of the evidence to anyone because we know that these people are able to falsify the facts,” he added.

Several research groups and human rights bodies have launched their own investigations.

Bellingcat, a Dutch-based international consortium of researchers, published an analysis of video and audio evidence gathered on social media. The material came from both Palestinian and Israeli military sources, and the analysis looked at such factors as timestamps, the locations of the videos, shadows and forensic audio analysis of gunshots.

The group found that while gunmen and Israeli soldiers were both in the area, the evidence supported witness accounts that Israeli fire killed Abu Akleh.

“Based on what we were able to review, the [Israeli soldiers] were in the closest position and had the clearest line of sight to Abu Akleh,” said Giancarlo Fiorella, the lead researcher of the analysis.

Fiorella acknowledged that the analysis cannot be 100 percent certain without such evidence as the bullet, weapons used by the army and GPS locations of Israeli forces. But he said the emergence of additional evidence typically bolsters preliminary conclusions and almost never overturns them.