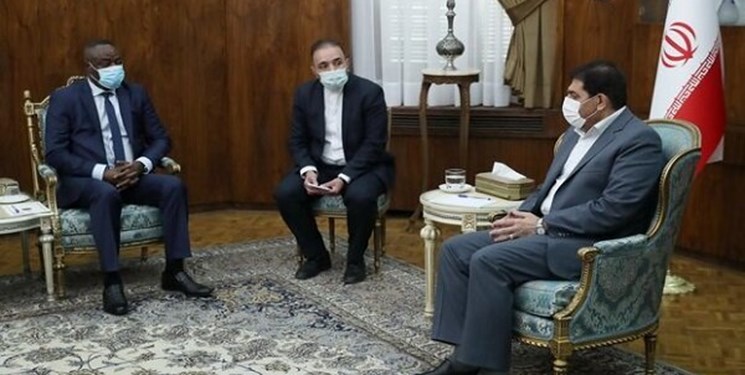 During the meeting in Tehran on Wednesday, Mokhber said that developing trade and economic relations with African countries is a top priority in Iran's foreign policy.

He added that volume of economic relations between Iran and Ghana should be increased.

Mokhber underlined high interest of Iranian government in deepening and strengthening relations with Ghana, saying that the volume of economic relations between the two countries should increase the same as political relations since expansion of trade with African countries is of top priority for foreign policy of the country.

Elsewhere in his remarks, Mokhber referred to the relief and healthcare services and assistance of Iranian government in Ghana especially activities of Iranian Red Crescent Society (IRCS), and stressed that Iran is ready to have a wider presence in that African country given the high capacities and capabilities of Ghana in the field of extraterrestrial cultivation, development of technical engineering services and investment of private sector in that country.

Turning to the qualification of Ghana national soccer team to 2022 World Cup in Qatar, Mokhber said that Iran enjoys high capability to host Ghana’s national soccer team, so that the two countries must take advantage of this chance to broaden bilateral relations.

Awal, who chairs Iran-Ghana Joint Cooperation Commission, for his part, emphasized that increase in volume of trade and economic relations with Iran is of paramount importance, so that Ghanaian government is ready to make its utmost effort for strengthening and expanding cooperation with Iran.

He called for active presence of Iranian private sector as well as the export of technical and engineering services to Ghana and stated that fruitful experience of Iran’s private sector can help boost Ghana’s trade and industrial policies.

Awal added that the Government of Ghana supports the presence and economic and commercial activities of the Islamic Republic, and all grounds are laid for the expansion of cooperation between the two countries, especially the investment of Iranian private companies in the African country.

Awal also praised the actions of the Government of the Islamic Republic of Iran in combating the Covid-19 and significantly reduce the daily death toll in the country, and stressed that Ghana wants to use Iran's experience and success in combating the epidemic.