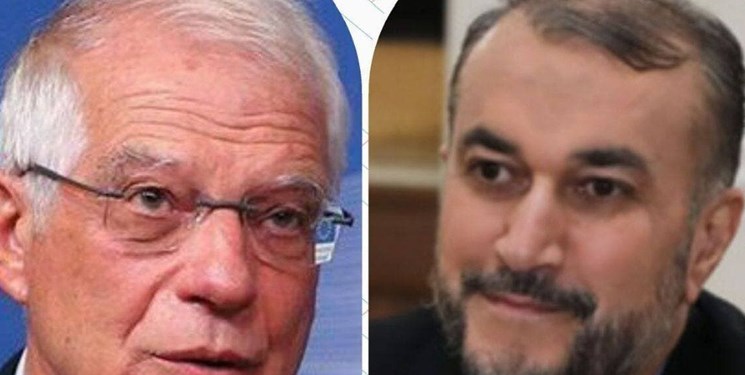 TEHRAN (FNA)- Iranian Foreign Minister Hossein Amir Abdollahian said that his country has participated in Vienna talks with goodwill and seriousness, but it's Washington that needs to show resolve and make a decision to make attainment of a deal possible.

“Tehran has the goodwill and seriousness required for reaching an agreement,” Amir Abdollahian said in phone talks with the European Union’s Foreign Policy Chief Josep Borrell on Friday night.

He called for reciprocal measures from other parties to resume the stalled talks.

Amir Abdollahian added that Tehran is determined to reach a strong and lasting agreement in Vienna.

He pointed to an earlier visit to Tehran by Borrell’s deputy Enrique Mora, saying the visit featured discussions of some initiatives between the two sides.

Mora was in Tehran last week for talks with Iran's chief nuclear negotiator Ali Baqeri Kani on efforts to salvage the deal that is officially known as the Joint Comprehensive Plan of Action (JCPOA).

Amir Abdollahian in his conversation with the top EU foreign policy official appreciated the bloc’s constructive role in the Vienna talks and Mora’s role as the coordinator of talks.

The two officials also discussed the raging war in Ukraine, which is now into its third month.

The top Iranian diplomat emphasized that his country was opposed to wars, including in Ukraine, while also drawing the EU official’s attention to the crisis in Yemen and Afghanistan.

He said the Islamic Republic has never applied double standards in armed conflicts, be it in Yemen, Afghanistan, Ukraine, or elsewhere.

He said Iran urges both warring sides in Ukraine to engage in diplomacy and dialogue to end the war, considering “focus on diplomacy and negotiation” to be the only way out of the crisis.

Amir Abdollahian said, over the past months, he has spoken with his Ukrainian and Russian counterparts, expressing Tehran’s readiness to mediate between the two sides.

Borrell, for his part, mentioned initiatives put forward by Iran during the Vienna talks, saying the parties are now “on the path of continuing negotiations and focusing on solutions.”

The European official said he was “hopeful” about the prospect of a “good result”, adding that the bloc is determined to continue efforts to close gaps between Iran and the United States.

He, however, regretted that the warring parties had been accusing each other of lacking the necessary will for negotiations, saying it complicated efforts to broker peace between them.

The former US administration led by Donald Trump unilaterally withdrew from the JCPOA in May 2018 and reinstated crippling economic sanctions that had been eased under the deal.

Since April last year, Iran and the remaining signatories to the landmark deal have been engaged in marathon talks in the Austrian capital to salvage the accord and seek a reversal of Trump’s maximum pressure campaign against the Islamic Republic.

The latest round of talks has been stalled over Washington's dilly-dallying tactics and refusal to respond to Iran's proposals.

Iran’s foreign ministry spokesman Saeed Khatibzadeh commenting on Mora’s Tehran visit in his weekly presser on Monday said “serious and result-oriented negotiations” were held during his trip and “special initiatives” were put forward by Iran.

He further added that negotiations were now in a better state after Mora’s visit, but Tehran was still waiting for Washington’s response to its proposals.