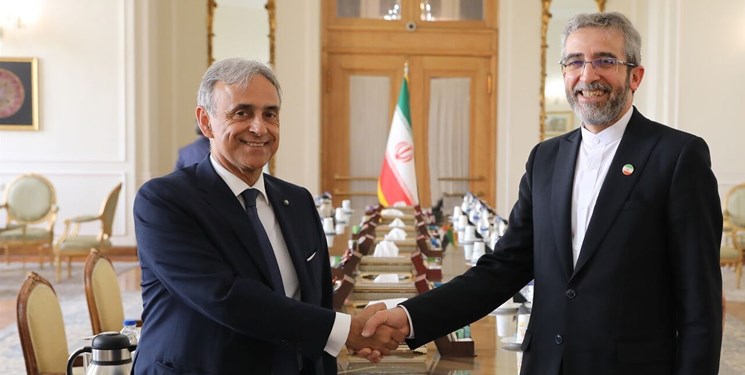 TEHRAN (FNA)- Iranian Deputy Foreign Minister for Political Affairs Ali Baqeri Kani said that Tehran and the European Union should establish long-lasting and reliable relations, saying that the global peace is not a one-way road.

Baqeri Kani made the remarks on Tuesday in a meeting with Deputy Foreign Minister and Secretary-General of the Italian Foreign Ministry for Political Affairs Ettore Francesco Sequi in the 3rd round of Iran’s diplomatic talks with Italy in Tehran.

During the meeting, he referred to the economic cooperation and amicable bilateral ties between Tehran and Rome, arguing that the history of Iran-EU relations during the past few decades proves the necessity of Europe’s greater efforts aimed at improvement of relations back to an acceptable, sustainable level.

Baqeri Kani said that there are important factors in Iran and Europe that necessitate sustainable and reliable relations, but there are external factors, specially beyond the Atlantic Ocean, that keep on promoting instable and shattered relations.

He added that the international conditions, specially the big threats against the energy and food security, are in need of continued interactions and moving towards sustainable cooperation between Iran and the EU.

Baqeri Kani emphasized that there is no doubt about the necessity of joint efforts against terrorism, meantime, noting that Iran and the EU have different viewpoints about the issue, as well as the different regional and international issues, and this is a reality.

He said that the differences of opinion and viewpoints can turn into an issue at the service of improvement of mutual understanding and cooperation, and this is also a reality.

There are joint paths for consultations and cooperation on regional issues, he said, asking for practical moves aimed at establishment of peace and stability in Afghanistan and Yemen.

The Iranian diplomat said that the most important historical lesson of the western countries and NATO presence in Afghanistan during the past 20 years is that the regional stability and world peace cannot be achieved through unilateralism and militarism.

Sequi, for his part, expressed delight for being in Tehran, and said the move is a sign of Rome’s interest in broadening cooperation with the Islamic Republic of Iran.

He said that ignoring the factors contributing to commercial and economic cooperation are not in line with the national interests of the two countries.

He also praised the Islamic Republic of Iran’s humanitarian moves, including in hosting the refugees from Afghanistan and expressed hope for stronger shared efforts aimed at restoration of stability and security in that country.

Last September, Iranian President Seyed Ebrahim Rayeesi said that Iran wants improvement of relations with the European states without the influence of unilateralist powers, specially the US.

“The Islamic Republic of Iran is willing to develop relations with the EU and the European countries in areas of mutual interest,” Rayeesi said in a phone conversation initiated by President of the European Council Charles Michel at the time.

He noted that continued and stable bilateral relations with the EU and each of its member states depends on the principle of mutual respect, focus on commonalities and preventing the influence of external factors on these relations, and added, "This requires the practical will of the European side and not associating it with the will of unilateralist powers like the US.”