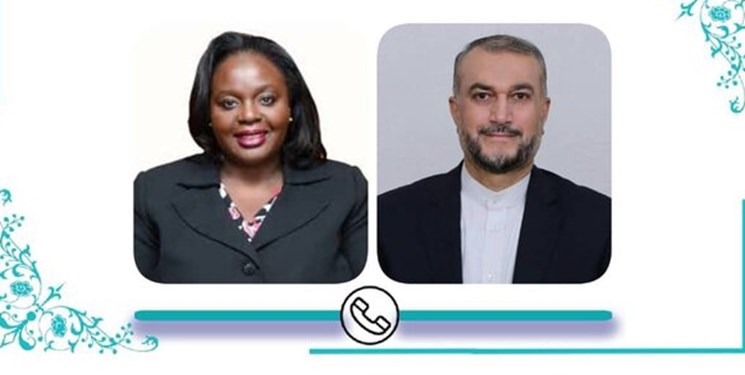 During the phone talk on Thursday night, Amir Abdollahian and Omamo explored avenues for bolstering and reinvigorating mutual cooperation in various areas.

During the telephone conversation, Amir Abdollahian assured his Kenyan counterpart that the Islamic Republic is ready to send humanitarian aid, including medical assistance such as vaccines to Kenya and the African Continent.

The Iranian foreign minister pointed to progress in the process of holding the joint commission of Iran and Kenya, and stressed the significance of broadening of relations with Africa, specially Kenya.

Amir Abdollahian also underlined the need for synergy between the Islamic Republic of Iran and Kenya regarding some common threats in the international arena like terrorism and piracy.

The Iranian foreign minister further pointed to the positive trend of containing the COVID-19 disease in Iran, and underlined his country’s readiness to send humanitarian aid, including medical assistance such as vaccines to Kenya and the African Continent.

He also invited the top Kenyan diplomat to visit Tehran.

Omamo, for her part, underlined Iran’s important place in the world and called for expansion of bilateral ties.

She then pointed to the upcoming sessions of the joint commission of Iran and Kenya and expressed hope that holding the commission will result in further expansion and development of relations between Tehran and Nairobi.

The Kenyan foreign minister reiterated the need to expand cooperation with Iran in regional and international organizations more than ever before.