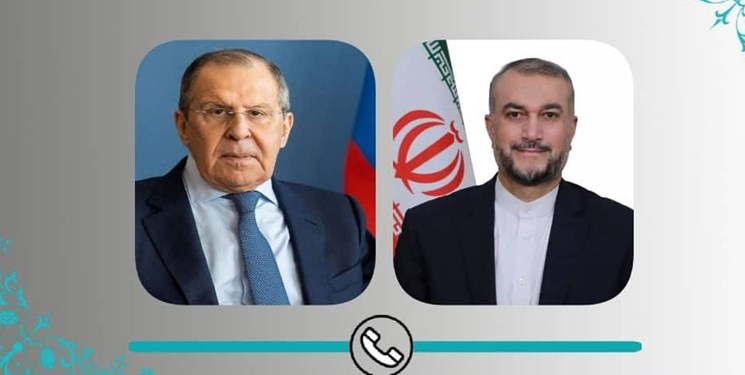 TEHRAN (FNA)- Iranian Foreign Minister Hossein Amir Abdollahian in a telephone conversation with his Russian counterpart Sergei Lavrov blasted the US for its unconstructive move vis-a-vis the Vienna talks.

"The unconstructive move by the US and the European troika to draft a resolution for the upcoming meeting of the IAEA’s board of governors and the creation of media hype against Iran disrupt the process of negotiations," Amir Abdollahian said.

Amir Abdollahian and Lavrov exchanged views over the most important bilateral, regional and international issues.

The two sides also discussed the latest state of ties between Tehran and Moscow and followed up various issues resulting from talks between the presidents of the two countries.

In a relevant development last month, Amir Abdollahian and Lavrov in a telephone conversation underlined the need to further develop cooperation between the two countries in different fields.

During the phone talk, the Iranian and Russian foreign ministers explored avenues to bolster and reinvigorate bilateral relations various areas.

The two sides also exchanged views on important international issues, including the situation in Ukraine.

In a relevant development in mid-March, Amir Abdollahian in a meeting with Lavrov underlined Tehran's willingness to further broaden relations with Moscow regardless of international developments.

"The Islamic Republic of Iran has always emphasized good relations with Russia as a friend and neighbor," Amir Abdollahian said.

He referred to the deepening of cooperation between the two countries in various fields, and said, "Relations between Iran and Russia will develop regardless of international developments."

He also appreciated the Russian negotiating team in Vienna talks for their constructive efforts to help come closer to an agreement to lift sanctions on Iran.

"Today is an important opportunity to discuss and consult on developments in Ukraine, Afghanistan, Yemen, Syria and Palestine and other international issues," Amir Abdollahian added.

"Both countries have common views on many international issues," he added, referring to the significant increase in the volume of economic relations between Iran and Russia.

"We will discuss with you further coordination of the Syrian settlement within the framework of the Astana format, as well as other crisis points in the Middle East and North Africa, and, of course, we will also talk about the Afghan settlement, which requires full attention," he said, adding, "I want to note that we appreciate our trust-based dialogue and your objective position on what is happening in Ukraine."

The Russian foreign minister added that interaction on international affairs has always occupied a significant place in the relations between Moscow and Tehran.

Lavrov pointed out that despite all known factors, the trade turnover between Russia and Iran is growing "at a record pace, exceeding $4 billion".

"I'm sure the prospects are even more impressive, given that the agreement to resume the Joint Comprehensive Plan of Action (JCPOA) to resolve the situation around the Iranian nuclear program has reached the finish line," the minister said.

Lavrov also pointed to the regular high-level consultations between the two countries, saying, "In today's talks, we will discuss in detail the Vienna talks, the developments in Ukraine, the issue of Syria and Yemen."