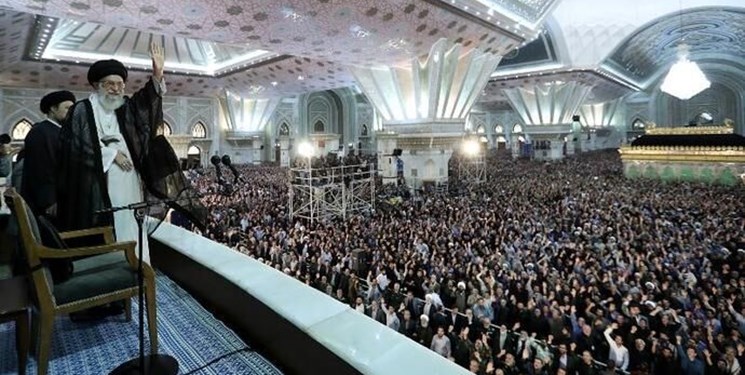 TEHRAN (FNA)- Supreme Leader of the Islamic Revolution Ayatollah Seyed Ali Khamenei underlined that the young generation has to know late Imam Khomeini well as he can show them the best way how to rule the country in the future.

The Supreme Leader made the remarks while delivering a speech to the enthusiastic people at the Imam Khomeini Mausoleum in Southern Tehran.

He pointed out that the young people should do their best to get familiar with the teachings of late Imam Khomeini.

Ayatollah Khamenei pointed the most famous revolutions in the world such as the French and Russian revolutions, and said that after those two big revolutions, the most brutal tyrannical regimes ruled France and USSR which killed too many of their people.

He, however, said that Imam Khomeini led a revolution that turned the tyrannical regime of Shah to an Islamic republic which is based on people's votes.

The Supreme Leader recalled that Imam Khomeini introduced spirituality and morality to governance and said that the Imam separated the Islamic Republic from the capitalist-based liberal democracy and dictatorial-centered communism, and proposed a new model with the Islamic Republic.

Ayatollah Khamenei said in the Islamic Republic that Imam Khomeini founded, both religion and people's votes, both economic justice and people's free economic activities are taken into account,

"We will strengthen the country's knowledge and economy, as well as the defense and security of the country. Both national unity and integration must be observed, while the diversity of different views and tendencies are respected," he added.

He further stated that let "our youth notice that the Westerners have looted the world for three centuries", from East Asia and Indonesia and the Philippines and Nepal and the Indian subcontinent to Central and West Asia and as far as North Africa and all over Black Africa for three centuries.

"In the three centuries that they were so involved in committing crimes, their thinkers were compiling human rights law for the world! This contradiction and their hypocrisy in word and deed is the main indicator of Western civilization," he said.

Imam Khomeini passed away in 1989 at the age of 86, almost a decade after the victory of the Islamic Revolution, which saw the overthrow of the US-backed Pahlavi regime in Iran, headed by Mohammad Reza Pahlavi, known as the 'Shah'.

Imam Khomeini spent many years in exile in Iraq, Turkey, and France, from where he led a swelling grassroots movement, which ultimately ousted the Shah and led to the formation of the Islamic Republic.

Imam Khomeini is remembered as the pioneer of a new era in Iran's history. An era that put centuries of monarchy behind and upended the Shah's domestic and foreign policies, replacing them with a political system that tries to rule the country based on the motto of independence from the west.