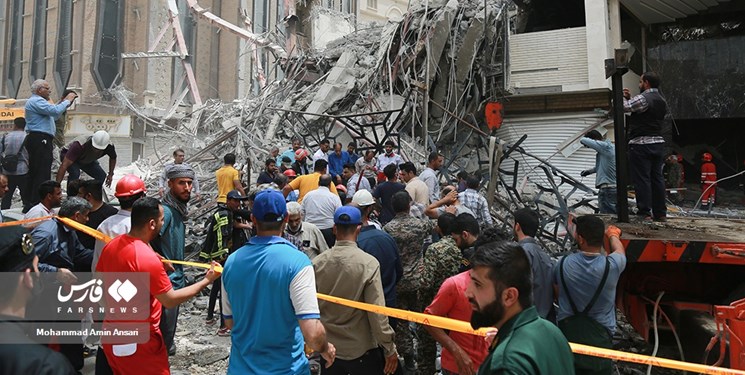 TEHRAN (FNA)- Fourteen suspects have been detained over the collapse of a 10-storey building in the city of Abadan in Southwestern Iran, the judiciary said.

Iran's Judiciary Spokesman Massoud Setayeshi told reporters on Tuesday that 14 people have been arrested in connection with the building collapse in Abadan in Khuzestan province.

He added that four former mayors of Abadan and officials with the city’s Construction Engineering Organization are among those arrested.

The 10-storey Metropol Building that was under construction partially collapsed on May 23.

Faulty construction practices have been blamed for the collapse of the building.
43 bodies have been recovered so far. Rescue operation is still ongoing as more people are feared to have been trapped under the rubble.

Officials have said the remains of the building will be completely destroyed after removing the debris.

Bahadori Jahromi told reporters on the sidelines of a cabinet meeting in Tehran last Wednesday that the cabinet has approved to allocate 700 billion rials to compensate for a part of the losses caused by the Metropol building collapse.