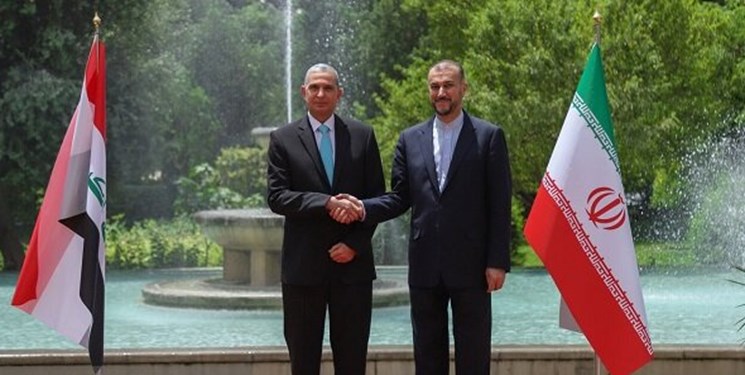 TEHRAN (FNA)- Iranian Foreign Minister Hossein Amir Abdollahian and Iraqi Interior Minister Othman al-Ghanimi in a meeting in Tehran underlined the need for increased cooperation to maintain security and stability in the region.

"Today, I met with the Minister of Interior of the Republic of Iraq, Mr. Othman Al-Ghanimi," Amir Abdollahian wrote on his twitter page on Tuesday.

Al-Ghanimi arrived in Tehran on Tuesday to discuss bilateral ties and regional issues with the Iranian officials.

Iranian Defense Minister Brigadier General Mohammad Reza Ashtiani in a meeting with al-Gha said that the western states are using terrorism as an instrument to prolong their military presence in the region, and stressed continued support for Iraq in fighting terrorist groups.

Iran enjoys valuable experience in the fight against terrorism and can help to enhance the security in Iraq, General Ashtiani said in a meeting with Iraqi Interior Minister Othman al-Ghanmi in Tehran on Tuesday.

"We believe that the countries of the region and West Asia must manage the security of the region, and it is impossible to achieve stability and peace as long as extra-regional forces are present in the region," General Ashtiani said.

He also appreciated the Iraqi parliament for approving the law of criminalizing relations with the Zionist regime.

Al-Ghanmi, for his part, said, "Iran has always stood by Iraq at various times, and we will never forget its assistance and the efforts of the Iranian forces in the fight against terrorism."

He called for the further expansion of cooperation with Iran, saying that Iran-Iraq cooperation can contribute to the development of different parts of the Republic of Iraq, specially the security and economic sectors of the country.