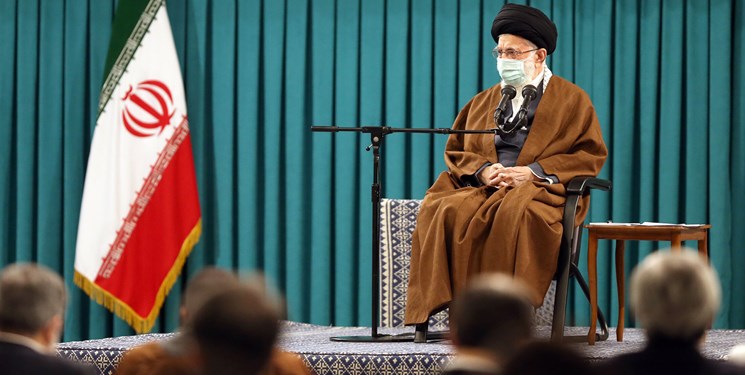 TEHRAN (FNA)- Supreme Leader of the Islamic Revolution Ayatollah Seyed Ali Khamenei said that revelation of the Zionist regime's plots is a definite responsibility for the Muslim pilgrims in Hajj.

“Exposing the Zionists' plots and conspiracies is one of the essential duties in Hajj,” Ayatollah Khamenei said on Wednesday, addressing the Iranian officials in charge of organizing Hajj, the annual Islamic pilgrimage to Mecca.

The Leader hailed the resumption of Hajj pilgrimage after a two-year hiatus as a major blessing, saying the annual ritual is a symbol of unity among Muslims.

Efforts should be made so that the Islamic unity is not disrupted, Ayatollah Khamenei said, warning that sowing sectarian strife has long been a scheme used by the British.

In relevant remarks in April, Ayatollah Khamenei said that the recent developments in Palestine and the region have annulled all attempts to compromise and normalize relations with Israel.

"The jihadi moves of the people of Palestine in the two northern and southern parts of the 1948 lands, and at the same time, the massive rallies in Jordan and Eastern Quds, the brave defense of the Al-Aqsa Mosque by Palestinian youth, and the military maneuvers in Gaza indicate that all of Palestine has turned into an arena of resistance. At the present time, the people of Palestine are unanimous about continuing this struggle on the path of God," Ayatollah Khamenei said.

"These incidents and what has occurred in Palestine in recent years is a seal of annulment on all schemes for compromise with the Zionist enemy. This is because no scheme or plan about Palestine is implementable in the absence of Palestine or against the consent of its owners, the Palestinians. This means that all former agreements such as the Oslo Accord, the Arabian two-state solution, the Deal of the Century and the recent humiliating attempts for the normalization of relations have been nullified," he underscored.

"The Islamic Republic of Iran advocates and supports the camp of Resistance. It advocates and supports the Palestinian Resistance. We have always said this, we have always acted on this, and we have stood by it. We condemn the treacherous move to normalize relations [with the Zionist regime]. We condemn the policy of a normalization of relations. Some Arab governments have asked the US to accelerate the matter of solving the Palestinian issue. If they mean that before the US leaves the region it should remove any obstacle standing in the way of the Zionist regime, then first of all, they have behaved treacherously and have brought disgrace to the Arab world. Secondly, they have been naïve since this is a case of the blind leading the blind," Ayatollah Khamenei said.