Spokesman: Iran to Give Firm Response to IAEA Resolution 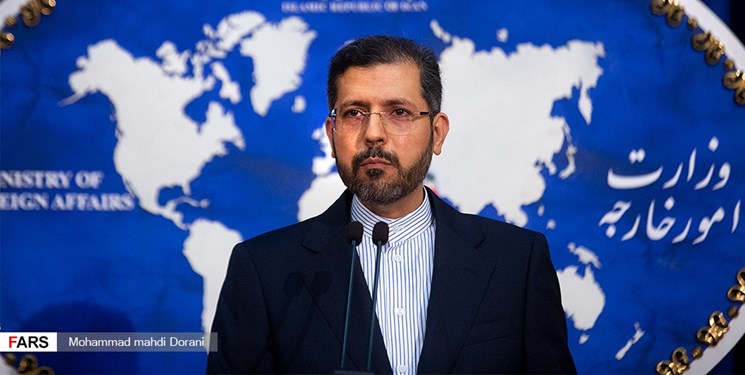 TEHRAN (FNA)- Iranian Foreign Ministry Spokesman Saeed Khatibzadeh said on Thursday that his country will give an appropriate and firm response to the recent resolution adopted by the UN nuclear watchdog against Iran.

“US-E3 put their shortsighted agenda ahead of IAEA's credibility by pushing a miscalculated and ill-advised resolution against a country with the world's most transparent peaceful nuclear program,” Khatibzadeh wrote on his twitter page.

US-E3 put their shortsighted agenda ahead of IAEA's credibility by pushing a miscalculated & ill-advised Res. against a country w/ the world's most transparent peaceful nuclear program.

The initiators are responsible for the consequences. Iran's response is firm & proportionate.

“The initiators are responsible for the consequences. Iran's response is firm and proportionate,” he added.

A Foreign Ministry statement also denounced the "non-constructive approach" of the IAEA, saying the Islamic Republic "has taken practical quid pro quo steps which include installation of advanced centrifuges and deactivation of cameras operating outside the Safeguards Agreement".

"The adoption of this resolution, which is based on the hasty and unbalanced report of the Director General of the IAEA and on false and fabricated information of the Zionist regime, will only weaken the process of cooperation and interaction of the Islamic Republic of Iran with the IAEA," it said.

The statement said the IAEA appeared to have resurrected issues which had been settled between the two sides seven years ago, despite the Islamic Republic having "always cooperated constructively" with the agency in recent years.

Iran, it said, had showed its good faith in cooperation with the IAEA by providing accurate technical information as confirmed by their joint statement issued in March when IAEA Director General Rafael Grossi visited Tehran.

"Likewise, the Agency was expected to take an independent, impartial and professional approach, taking constructive and realistic steps to normalize safeguards issues that according to the Agency own admission did not bear proliferation concerns," the statement said.

"It seems some have forgotten that all past issues were closed once and for all on December 15, 2015 by the Board of Governors," it added.

The foreign ministry statement denounced the resolution as a "political, wrongful and unconstructive act" against a country which "currently has one of the most transparent peaceful nuclear programs among the IAEA members".

The resolution, proposed by the US, Germany, France and Britain, was approved late Wednesday with 30 votes in favor, two against and three abstentions.

The trigger for the latest Western move was a report issued by the IAEA after Grossi made a controversial visit to Israel and met the regime's leaders late last month. The agency has been on the receiving end of documents supplied by Israel about Iran's nuclear program, which Tehran has rejected as fake and fabricated by MKO terrorists.

Iran announced on Wednesday that it has removed two IAEA cameras which had been installed beyond the country's undertakings under the safeguards agreement after the UN Agency's chief started escalating tensions against Tehran.

The Atomic Energy Organization of Iran (AEOI) made the announcement, saying that the UN atomic body has not appreciated Iran's good-will gesture and has instead viewed Tehran’s voluntary move as part of its undertakings.