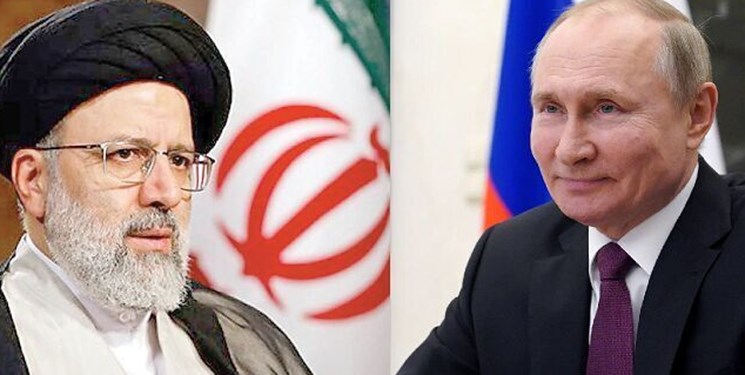 Rayeesi and Putin in a phone conversation on Wednesday discussed a range of bilateral, regional and global issues, and reaffirmed their commitment to boost ties.

During phone talks, Rayeesi stressed that “cooperation and coordination between independent countries in pursuit of collective interests at the regional and international levels will neutralize the pressures and movements of other international actors”

“The Islamic Republic of Iran, regardless of international developments, seeks to deepen and stabilize its comprehensive relations with independent countries,” he added.

Rayeesi said despite the US-led pressures against Tehran over its peaceful nuclear program, the International Atomic Energy Agency (IAEA) has on many occasions confirmed that there had been no deviations in Iran’s nuclear activities.

“We have fulfilled our commitments under the [Iran] deal, and now is the time for the United States to make a decision,” he noted.

Putin, for his part, hinted at an anti-Iran move led by the US and its European allies at the IAEA Board of Governors, saying that his country opposes such moves.

“We believe that their actions will not help resolve the current issues, and Russia’s position is to oppose such actions,” he said.

The two leaders also discussed the need to continue diplomatic efforts to reach an agreement in the Austrian capital, according to the Kremlin’s readout of the call.

They underlined the need for the full implementation of the JCPOA and UN Security Council Resolution 2231, which endorses the deal, by all original signatories.

At least 22 people were killed and dozens injured after a train carrying over 300 passengers derailed from the track after colliding with an excavator.

Further investigation is underway to find out the exact cause of the accident.

Elsewhere in their conversation, Rayeesi expressed the hope that the conflict in Ukraine would end as soon as possible.

He placed great emphasis on a diplomatic solution to the conflict, adding that the Islamic Republic of Iran is ready to use its capacities to help end the war.

The IAEA approved a resolution, proposed by the US, Germany, France and Britain, against Iran late Wednesday with 30 votes in favor, two against and three abstentions.

The Iranian foreign ministry denounced the "non-constructive approach" of the IAEA, saying the Islamic Republic "has taken practical quid pro quo steps which include installation of advanced centrifuges and deactivation of cameras operating outside the Safeguards Agreement".

"The adoption of this resolution, which is based on the hasty and unbalanced report of the Director General of the IAEA and on false and fabricated information of the Zionist regime, will only weaken the process of cooperation and interaction of the Islamic Republic of Iran with the IAEA," it said.

The statement said the IAEA appeared to have resurrected issues which had been settled between the two sides seven years ago, despite the Islamic Republic having "always cooperated constructively" with the agency in recent years.

Iran, it said, had showed its good faith in cooperation with the IAEA by providing accurate technical information as confirmed by their joint statement issued in March when IAEA Director General Rafael Grossi visited Tehran.

"Likewise, the Agency was expected to take an independent, impartial and professional approach, taking constructive and realistic steps to normalize safeguards issues that according to the Agency own admission did not bear proliferation concerns," the statement said.

"It seems some have forgotten that all past issues were closed once and for all on December 15, 2015 by the Board of Governors," it added.

The foreign ministry statement denounced the resolution as a "political, wrongful and unconstructive act" against a country which "currently has one of the most transparent peaceful nuclear programs among the IAEA members".

Iran announced on Wednesday that it has removed two IAEA cameras which had been installed beyond the country's undertakings under the safeguards agreement after the UN Agency's chief started escalating tensions against Tehran.

The Atomic Energy Organization of Iran (AEOI) made the announcement.

The AEOI said the UN atomic body has not appreciated Iran's good-will gesture and has instead viewed Tehran’s voluntary move as part of its undertakings.