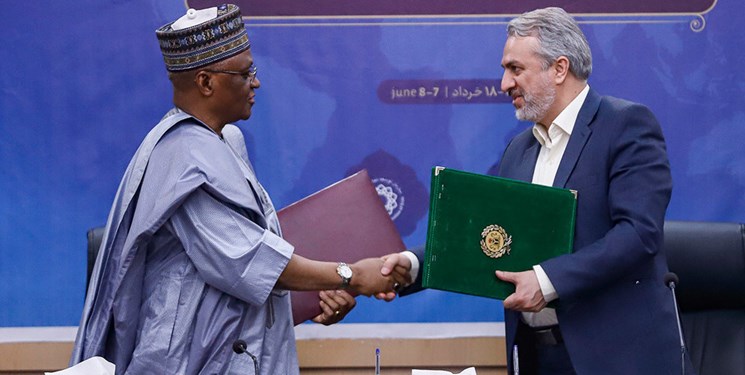 The MoUs were inked on Wednesday in the presence of Iranian Minister of Industry, Mine and Trade Reza Fatemi Amin and Nigerian Minister of State for Foreign Affairs Zubairu Dada.

They said that the agreements had been reached as part of a sixth round of intergovernmental committee meetings held between officials of Iran and Nigeria.

The Nigerian official hailed the resumption of intergovernmental committee meetings between Iran and Nigeria after more than eight years.

He said the presence of the Nigerian trade delegation in Iran is a sign the African country is committed to implement bilateral agreements and contracts.

Iran’s trade minister Fatemi Amin also said Iran and Nigeria are seeking to rebuild their ties, adding that trade between the two countries had increased three-fold over the past nine months.

Fatemi Amin said, however, that an annual bilateral trade figure of $125 million does not match the position of Iran and Nigeria as two major economies in their respective regions.

He said launching direct flight routes between Iran and Nigeria will be a first step in facilitating trade between the two countries.

Director-General of the African Bureau of the Trade Promotion Organization of Iran Mohammad Sadeq Qannadzadeh said on Tuesday that his country considers Africa, specially Nigeria, as a precious economic partner.

Qannadzadeh made the remarks in the Sixth Iran-Nigeria Joint Commission meeting.

During the meeting, the Nigerian and Iranian officials have discussed exchange of trade delegations, participation in exhibitions and facilitation of trade interactions, an Iranian official said.

He pointed out that both countries enjoy economic, political and cultural commonalities and are both member states of the Organization of Islamic Cooperation (OIC).

Qnnadzadeh added that both nations are also members of the Organization of the Petroleum Exporting Countries (OPEC), possess rich oil and gas reservoirs, and have more than 15 percent of shares of the Islamic Development Bank, but their bilateral economic and trade exchanges is not satisfactory.

The Iranian official went on to say that statistics indicate that the volume of trade exchanges between Nigeria and Iran stood at about 125 million dollars in last year, which seems to be a tiny figure in comparison with each country’s foreign trade of around 100 billion dollars per annum.

All necessary efforts to promote bilateral economic relations have been put on agenda, including activation of joint commissions, so the Sixth Iran-Nigeria Joint Commission is held today after eight years of pause, he noted.

Remarkable accords and documents have been signed by both nations, which are going to be pursued by the joint commission, Qannadzadeh said.