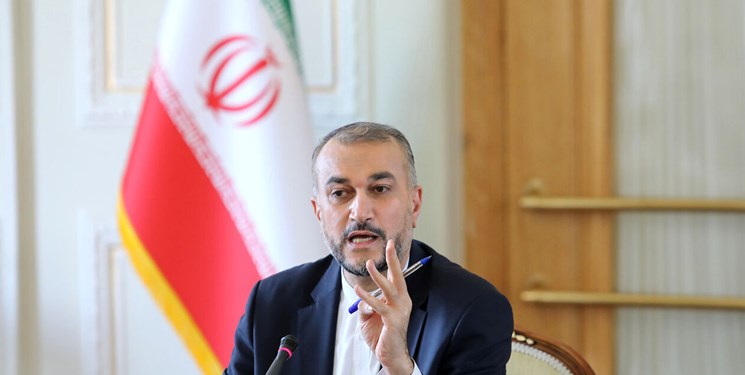 TEHRAN (FNA)- Iranian Foreign Minister Hossein Amir Abdollahian said that the western states participating in talks with the country's officials had demanded Tehran to recognize the Zionist regime in Israel for the resolution of issues related to its nuclear program.

The West, during the negotiations with Iran in the past, had been pushing for the country’s recognition of Israel in return for resolving issues related to Tehran’s nuclear program, Amir Abdollahian said, addressing top Indian Muslim figures in India on Wednesday.

Of course, the western states, including the US, know that nuclear bombs have no place in Iran’s religious beliefs and the country is not after these weapons, he said, adding that with such allegations, they sought to pressure Tehran into recognizing the Zionist regime and achieve their goals, but they failed.

The top Iranian diplomat said that his country considers it a duty to make efforts for the liberation of the Holy Quds from Israeli occupation.

Amir Abdollahian also highlighted the need for efforts to identify plots against the Islamic values.

Supreme Leader of the Islamic Revolution Ayatollah Seyed Ali Khamenei has on many occasions said the Islamic Republic considers the pursuit and possession of nuclear weapons "a grave sin" from every logical, religious and theoretical standpoint. On April 17, 2010 Ayatollah Khamenei issued a fatwa declaring that the production, stockpiling, and use of nuclear weapons are all haram (religiously banned).