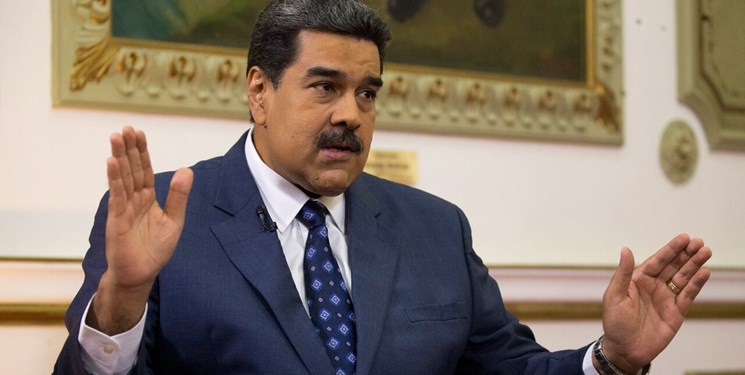 TEHRAN (FNA)- President Nicolas Maduro stated Venezuela and Iran have a common goal of fighting colonialism and imperialism across the globe.

Maduro, who arrived in Tehran on Friday at the head of a high-ranking politico-economic delegation, made the remarks in an exclusive interview with Iran's Spanish-language television channel Hispan TV.

Venezuela and Iran are on the frontline of shaping a world free of imperialism and dominant powers, Maduro said.

The era of the United States' military dominance in the world is over, the Venezuelan president stated.

Venezuela and Iran should share knowledge in all fields to create a new world, Maduro added, stressing that humanity is transitioning and a‎ new geopolitical system would be established in the world.

Venezuela and Iran, two countries united by a common vision regarding international issues and victims of coercive measures by the United States and its allies, have had diplomatic ties for more than 60 years. But mutual relations became strategic with the arrival of the late commander Hugo Chavez to power in Venezuela in 1999.

On the international scene, specifically on the conflict in Ukraine, the Venezuelan head of state said "we are living through a time of geopolitical transition that will define the destiny of the 21st century".

It is a century of the decline of hegemonic power and Iran and Venezuela are on the forefront of this process, Maduro noted. The comprehensive map of cooperation is the spearhead towards achievement of a new world, the president added.

The president hailed Iran's courageous move to send fuel tankers to his energy-hungry nation, saying Tehran's delivery of oil to Caracas was a great help to the Venezuelan people.

Iran sent fuel to Venezuela despite US sanctions and threats, Maduro stated.

Iran and Venezuela have managed to withstand economic pressure from the United States, and have closely cooperated to offset the impact of illegal sanctions, particularly those targeting their energy sectors.

Oil industry analysts said in January that Venezuela had doubled its oil production thanks to Iran's help in defiance of US sanctions against Caracas.

The Venezuelan oil production reached an estimated average of 900,000 barrels per day (bpd) in December and could reach 850,000 bpd in January, oil industry sources told the Miami Herald.

Within the framework of the Tehran-Caracas strategic alliance, Iran sent five tankers loaded with 1.53 million barrels of gasoline and additives to Venezuela in May 2020 to supply the South American nation, mired in severe fuel shortages, as a result of sanctions.

Venezuelan oil experts confirmed the significant growth in the country’s production, underlining that the Iranian naphtha is essential for the government in Caracas to be able to sell crude from the Orinoco Oil Belt, which needs to be diluted to be sold on world markets.

Elsewhere in his interview, Maduro stated Venezuela and Iran have enjoyed brotherly ties for decades, reiterating his country's resolve to seek closer cooperation with Tehran.

He added Caracas and Tehran have revolutionary backgrounds and they have always supported one another in hard times.

Maduro also noted that the two countries are working to expand cooperation in the tourism sector and establish direct flights between Caracas and Tehran.

He stated Venezuela welcomes and invites investments from Iran, noting that a delegation, which is currently accompanying him, aims to find ways to improve relations.

Venezuela and Iran would open a new era in mutual relations, Maduro continued.

He said many companies are willing to work in Venezuela, which by itself vindicates the fact that resisting the US sanctions will eventually bear fruit.

The Venezuelan president also highlighted the need to well inform the Iranian and Venezuelan nations about the war of sanctions and find ways to counter them with steadfastness.

Maduro added Caracas and Tehran have shaped the strategy of resistance economy and are working to expand it. He announced the incorporation of people in the two governments' efforts is among their key strategies to counter sanctions.

The Venezuelan president described Palestine as the most sacred cause of humanity. Maduro stressed the history of Palestine is admirable since people with different religions have lived there in peace.