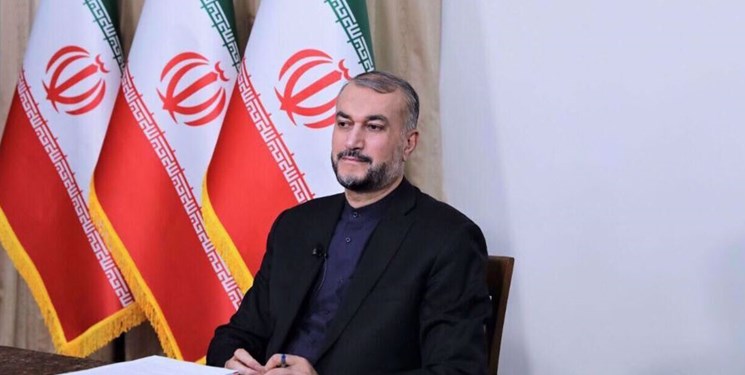 TEHRAN (FNA)- Iranian Foreign Minister Hossein Amir Abdollahian underlined that the Islamic Republic will stand firmly against the other side’s excessive demands in the Vienna talks.

Amir Abdollahian made the remarks while answering questions about the latest developments surrounding the diplomatic row over Iran's nuclear program.

"Tehran has offered its initiatives and ideas on a logical basis whenever it was treated in a logical way by the other side," the Iranian foreign minister said.

He pointed out that every time that the other side put forth excessive demands during the Vienna talks, Iran used its own tools and power, so that they would understand that the interests and welfare of the Iranian nation were important to us and that Iran will continue its efforts to this end.

"While emphasizing the need to completely protect the rights of the country in international arena, our people expect us to do so while respecting all the red lines," Amir Abdollahian added.

A sum of 260 Iranian lawmakers condemned the recent resolution issued by the International Atomic Energy Agency Board of Governors against Tehran, and said that the move proved that the IAEA and its director general (Rafael Grossi) have lost all their technical credibility.

"Unfortunately, the [IAEA] director general himself, and subsequently the secretariat of the International Atomic Energy Agency, have clearly lost their technical credibility," the Iranian lawmakers said said in their statement while referring to Rafael Grossi’s recent visit to Israel.

"The visit by Rafael Grossi coupled with the fact that the Israeli regime does not recognize the nuclear Non-Proliferation Treaty (NPT), was the most evident sign of Grossi’s biased behavior that cast doubt on his commitment to implement his respective organization’s mission, which is to ensure nuclear disarmament," the statement added.

The Iranian lawmakers pointed out that numerous IAEA reports verified that the Islamic Republic of Iran, through its goodwill, provided the UN nuclear watchdog with unlimited access to the country’s nuclear sites.

However, they emphasized, the IAEA has failed to use such opportunities to resolve Western claims over Iran’s nuclear program, while raising new irrelevant questions each time that made Iran doubtful of the need for such bilateral cooperation.

The lawmakers further said that the agency has used the allegations made by the Zionist spy service as the basis for its requests to access Iran’s nuclear facilities, in contradiction to its own rules and regulations.

“This is a clear indication of the political and non-technical nature of the IAEA’s demands on the remaining issues and the three allegedly undeclared nuclear sites,” the statement added.

The lawmakers also expressed their support for moves to reduce Iran’s cooperation with the IAEA, such as turning off the cameras that are active under the Safeguard Agreements.