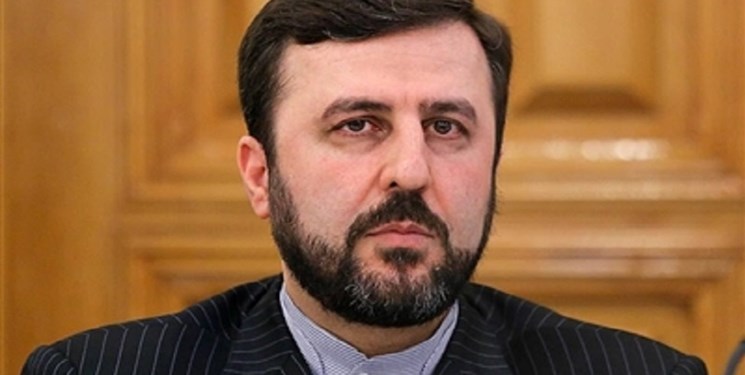 TEHRAN (FNA)- Deputy Chief of Iran's Judiciary and head of the country's Human Rights Headquarters Kazzem Qaribabadi blasted the "Illegal" detention and trial of an Iranian diplomat in Belgium on false charges.

Qaribabadi made the remarks in a letter to the UN High Commissioner for Human Rights.

He expressed deep concern over the blatant violation of Assadollah Assadi’s rights by the two governments of Belgium and Germany.

In June 2018, Belgian authorities said that the Belgian police had intercepted a car carrying homemade explosives and a detonation device, claiming that Assadollah Assadi had handed the materials to two people in Belgium earlier. Assadi, himself, was apprehended in Germany the next day and told that he could not apply his diplomatic immunity.

A Belgian court then sentenced the diplomat, who serves as the third counselor at Iran's Embassy in Vienna, to 20 years in prison after accusing him of plotting an alleged attack against the anti-Iran terrorist Mujahedin-e-Khalq (MKO) cult.

The full text of Qaribabadi's letter to the UN High Commissioner for Human Rights is as follows:

In my capacity as the Secretary-General of the High Council for Human Rights of the Islamic Republic of Iran, one task assigned thereto is to follow up on the cases of human rights violations and to secure the denied rights of foreign-based Iranian nationals, I, the undersigned, am addressing this urgent letter to Your Excellency to express my profound concern about the flagrant violations of Mr. Assadollah Assadi’s human rights by authorities in the Federal Republic of Germany and Belgium.

The aforesaid is one of the Islamic Republic of Iran’s diplomatic agents stationed in Vienna, Austria. Despite enjoying diplomatic immunity, he was unlawfully arrested in July 2018 in the State of Bavaria in Germany on his way back to his residence in Vienna. After 101 days in custody, Assadi was extradited to Belgium in October 2018 pursuant to an unlawful ruling issued by the Karlsruhe court, after which, the Antwerp criminal court illegally sentenced him to twenty years in jail irrespective of diplomatic immunity thereof by virtue of the 1961 Vienna Convention on Diplomatic Relations. He is currently imprisoned in Belgium.

Given the leadership role and the mandate assigned to the High Commissioner for Human Rights in safeguarding all human rights and following up on the enforcement of international and human rights obligations by the Federal Republic of Germany and Belgium, I am hereby listing the instances of human rights violations by said States with a view to following up on and securing the forgoing person’s rights:

The Federal Republic of Germany is a signatory to the 1961 Vienna Convention on Diplomatic Relations. Membership of numerous international conventions on human rights and additional protocols as well as membership of the European Convention on Human Rights requires Germany to enforce provisions set forth therein. Nonetheless, the measures undertaken by the German Government amount to Berlin’s flagrant violations of its international and human rights obligations vis-à-vis Assadi and his family.

Article 40 of the 1961 Vienna Convention on Diplomatic Relations stipulates that a diplomatic agent and members of his family accompanying him shall be accorded inviolability and the entire immunities and privileges set forth therein for returning to a diplomatic post in a third State or transiting a third State to return to their own country. The German police and judicial officials’ unlawful conduct in the illegal detention of Assadi and his family, in contravention of the binding regulations of Article 40, has not only violated the 1961 Vienna Convention, but also it has resulted in illegal denial of freedom and physical restrictions under tough conditions. Not only is that in conflict with the principles set forth in the UN Charter, but it also amounts to the flagrant violation of the right to liberty and security stipulated in Article 3 of the Universal Declaration of Human Rights, Article 9 (1) of the International Covenant on Civil and Political Rights as well as Article 5 of European Convention on Human Rights.

Furthermore, the Federal Republic of Germany is a signatory to the 1984 Convention against Torture and Other Cruel, Inhuman or Degrading Treatment or Punishment, the International Covenant on Civil and Political Rights and the European Convention on Human Rights, whereby respectively Articles 2, 7 and 3 in the said documents require Germany to refrain from subjecting any person to torture, cruel, inhuman or degrading treatment or punishment. Incarcerating Assadi in a cold and poorly-lighted cell, failure to provide sufficient food and drinking water thereto, holding him in the section reserved for dangerous criminals, imprisonment in a bunker fitted with CCTV for a period of 28 days, failure to provide sufficient clothing in conformity with climate conditions, undressing, and improper behavior by police and penitentiary authorities during custody and extradition to Belgium have altogether subjected the above named to physical and psychological torture and humiliation, in violation of the rights set forth in the foregoing documents.

Prohibition of discrimination vis-à-vis inmates is among obligations which, on the strength of Article 2(1), 10 and 26 of the International Covenant on Civil and Political Rights and Article 14 of the European Convention on Human Rights, require the authorities of the Federal Republic of Germany to comply therewith vis-à-vis all detainees and prisoners. Albeit Assadi is a diplomatic agent and contrary to international regulations, he had been held in solitary confinement in a bunker for 28 days; he had been held in the section reserved for dangerous criminals and denied access to such facilities as TV, exercise equipment and food recipients, to which other inmates have access.

Under any circumstances, the relatives of the detainee should be immediately informed of the detention and place of detention and be granted the right to communication and visitation. The penitentiary authorities’ refusal to authorize Assadi to have correspondence and communicate with his family for 53 days amounts to flagrant violation of Articles 7 and 10 (1) of the International Covenant on Civil and Political Rights and Article 8 (1) of the European Convention on Human Rights.

I regret to point out that during the 101-day period Assadi was illegally detained, penitentiary authorities violated the right to freedom of religion and practice thereof under Article 18 of the International Covenant on Civil and Political Rights and Article 9 of the European Convention on Human Rights, by prohibiting observance of religious rituals and confiscating religious books.

Similar to Germany, Belgium is a signatory to numerous international human rights documents and additional protocols as well as the European Convention on Human Rights, which should in principle indicate safeguarding and respecting human rights therein. Nonetheless, the fact of the matter is otherwise when it comes to the unlawful detention, trial and imprisonment of Mr. Assadi. The obligations set forth in the 1961 Vienna Convention on Diplomatic Relations are binding upon Belgium as a signatory thereto, and the aforesaid, as the diplomatic agent of the Islamic Republic of Iran in Austria, is entitled to the rights provided for in the said Convention. The order for the illegal detention of a diplomatic agent and extradition thereof to Belgium is in full conflict with the principle of inviolability and diplomatic immunity accorded to diplomatic agents under Article 31 and 40 of the said Convention and also violates the principles provided for in the UN Charter.

Prisoners are authorized to communicate with family and friends during regular intervals and under necessary surveillance. However, penitentiary authorities holding Assadi in Belgium have denied him the right to communicate with children, siblings and other relatives and mete out highly strict and offensive treatment thereto. Such unlawful treatment amounts to flagrant violation of Belgium’s obligations under Articles 7 and 10 (1) of the International Covenant on Civil and Political Rights and Article 8 of the European Convention on Human Rights.

The facts pertaining to human rights violations in the case of the aforesaid can be verified simply by consulting media. The foregoing person has personally declared these instances of rights violations, receiving no attention from German and Belgian authorities.

In witness whereof, on account of Your Excellency’s duty to protect, promote and realize human rights, I demand that Your Excellency undertake all necessary measures to hold the aforementioned States accountable and prevent the continuation of violations and inform the High Council for Human Rights of the Islamic Republic of Iran of measures undertaken to that effect.