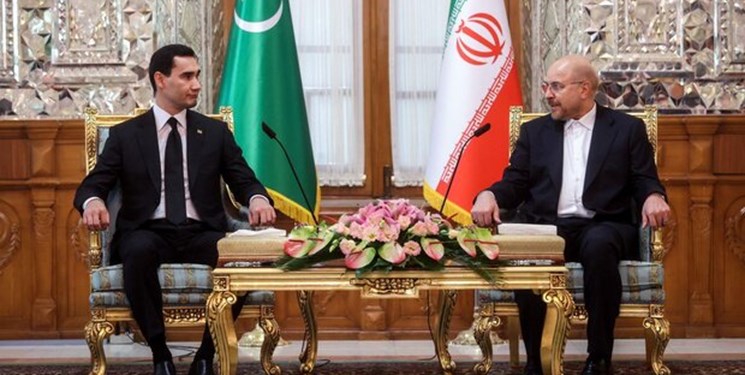 TEHRAN (FNA)- Iranian Parliament Speaker Mohammad Baqeri Qalibaf repeated his country's call for the formation of an all-inclusive government in Afghanistan with the participation of all Afghan groups.

Qalibaf made the remarks in a meeting with Turkmenistan President Serdar Berdimuhamedow in Tehran on Wednesday.

He stressed the importance of creating security in Afghanistan, which shares borders with both Iran and Turkmenistan, and called for tackling issues such as the presence of terrorist groups and the issue of illicit drugs in that country as two of the most important issues that require serious cooperation between neighboring countries and Afghanistan.

Qalibaf reiterated the need for formation of an inclusive government in Afghanistan with the participation of all Afghan groups as a solution to the problems.

He also said that Iran and the neighboring Turkmenistan have opened a new chapter in their bilateral relations with the visit of the Turkmenistan delegation to Iran.

He pointed out that the new administration in Iran has focused its foreign policy on relations with neighboring countries, adding that the Turkmenistan president's trip to Tehran will open a new chapter in the two countries' bilateral relations.

Qalibaf called for the stepped up efforts to expand bilateral relations by implementing the existing bilateral agreements.

Berdimuhamedow, for his part, described relations with neighbors, especially Iran, as one of the priorities of the Republic of Turkmenistan.

The two sides also stressed the need for closer parliamentary relations between the two nations.

This is Berdimuhamedow’s first visit to Iran as Turkmenistan’s president.

He traveled to Tehran in January as the special envoy of Turkmenistan’s former president, Gurbanguly Berdimuhamedov, and held talks with President Rayeesi.

Iran and Turkmenistan signed a sum of nine documents and memoranda of understanding (MoUs) to broaden bilateral relations in different fields.

The signing ceremony was held at the Saadabad cultural complex in Northern Tehran.

President Rayeesi and his Turkmen counterpart presided over the ceremony in Tehran on Wednesday morning to sign the agreements.