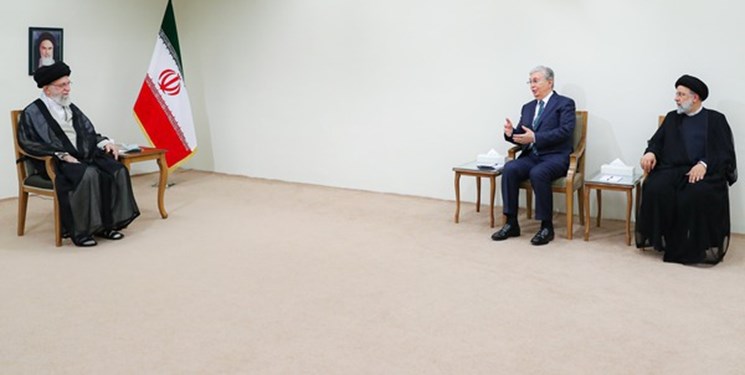 TEHRAN (FNA)- Supreme Leader of the Islamic Revolution Ayatollah Seyed Ali Khamenei blamed the West's unharnessed plan and desire to expand the NATO as the main problem in the Ukraine war.

Ayatollah Khamenei referred to the deep historical and cultural ties between Iran and Kazakhstan during a meeting with the President of Kazakhstan, Kassym-Jomart Tokayev, and his accompanying delegation on Sunday, and emphasized the need to expand cooperation between the two countries in various fields, particularly regional cooperation.

He stressed that coordination in political and economic issues is necessary for the development of relations and underlined the need to start a joint commission, "The two sides must intensify their efforts to follow up on agreements and to implement them. "

The Leader also considered an increase in cultural cooperation between Iran and Kazakhstan to be important and added, "Farabi (Alpharabius), a Muslim philosopher and scholar with Kazakhstani origins whose works have been researched and studied in Iran for 1,000 years, can be considered a basis for cultural cooperation and the founding of a mutual scholarly committee between Iran and Kazakhstan."

Ayatollah Khamenei also spoke about the issues of Ukraine and said, "Concerning the issue of Ukraine, the main problem is that the West is seeking to expand NATO wherever they can without taking anything into consideration."

He added, "It is necessary to carefully monitor and examine matters and to be vigilant because the US and the West always seek to expand their influence in different regions, including in East and West Asia, as well as to strike a blow against countries’ independence and sovereignty."

This meeting was also attended by the Iranian president Seyed Ebrahim Rayeesi. During the meeting, Kazakhstan’s President Kassym-Jomart Tokayev, stated, "We had very good talks with Rayeesi and the documents signed by both sides can pave the way for the further expansion of relations between the two countries."

The President of Kazakhstan emphasized that the historical and cultural commonalities between Iran and Kazakhstan had deep roots. Furthermore, he welcomed the proposal of the Leader for the establishment of a mutual scholarly committee on Farabi. He also expressed his views on regional issues and the situation in Ukraine, and he explained the situation in his country after the failed coup attempt in January of last year.