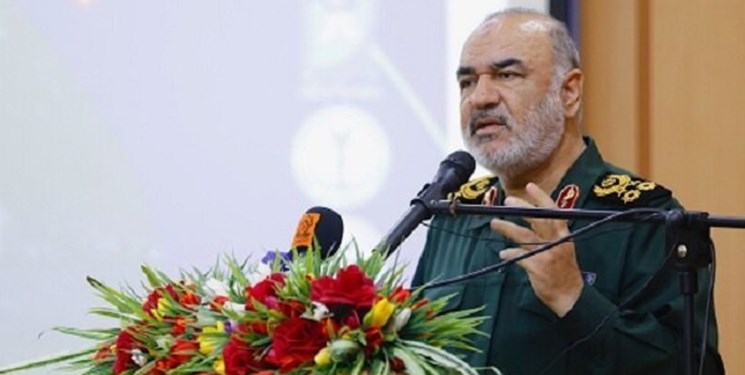 TEHRAN (FNA)- Commander of the Islamic Revolution Guards Corps (IRGC) Major General Hossein Salami said that the failures and defeats that enemies sustained in the Muslim world in the past few decades were the result of Tehran's strategies and movements.

General Salami said on Monday the enemies know that Tehran is the focal point of movement, strategy and inspiration and that this is where they have suffered defeat after defeat in the Muslim world.

He added that the adversaries are also well aware that their decline started in Tehran.

General Salami said all this is why the foes have united to target Tehran.

The IRGC commander further described the city as the anchorage of peace and stability of the Islamic Revolution and of society.

He also said the country will not allow the enemies to undermine security there.

General Salami noted that Iran must provide security instead of preventing insecurity.

He also said provision of security means it must be such that nobody can disrupt it.

General Salami also hailed Ayatollah Khamenei as a charismatic and prudent leader who only wants the well-being, prosperity and independence for the Iranian people.

In relevant remarks in September, General Salami said that Iran is bolstering its power to gain victory against Washington, noting that Israel is no more counted as a power.

“We have built power to defeat the US. When we build power for man's largest military empir, i.e. the US, small powers like the Zionist regime are no longer counted in our equations,” General Salami said.

Also in the same month, General Salami said that the US has lost its power and is a defeated, fugitive and depressed state which has been forced to withdraw its forces from the region.