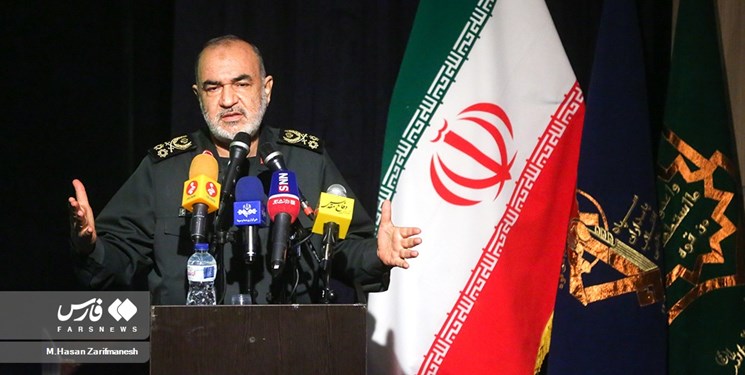 TEHRAN (FNA)- Commander of the Islamic Revolution Guards Corps (IRGC) Major General Hossein Salami said that the Zionist regime has collapsed politically and the US seeks a reputable withdrawal from the region.

"If you follow the news, you will see that the Zionist regime has collapsed politically and the US is seeking a reputable escape from the Islamic world," General Salami said, addressing a ceremony on Tuesday.

He also said that Iran's history is full of confrontations with different enemies, noting that the side who always had to retreat was the enemy.

General Salami described the enemies as dull, incapable and desperate to pursue their goals, saying, "The desperate arrogant powers seek to find a way out."

Meanwhile, the IRGC chief said the enemies could not believe that the Islamic Revolution is going to celebrate its 44th anniversary despite all their malicious attempts and plots.

"The enemy did not think the Iranian nation would come out victorious for 44 years in a continuous and global struggle," General Salami underlined.

He added that "the (Iranian) people who have given hundreds of thousands of martyrs to preserve the Establishment and their revolution will never give up the ideals and goals of the revolution and will not be separated from their Imam".

"The country is gaining more strength and in the near future Iran will be one of the world's top powers," General Salami stressed.

General Salami had also in 2020 said that the US had been isolated in the world and was withdrawing from the region.

“Today the US, which has been exerting pressures to isolate Iran, has itself been isolated. The US has gradually lost its political influence in the region and the world and has been marginalized in the political developments and failed to score any victory in the battlefield,” General Salami said.