Sadr: Iran Neither Meddled in Iraqi Politics Nor Put Pressure on Any Party 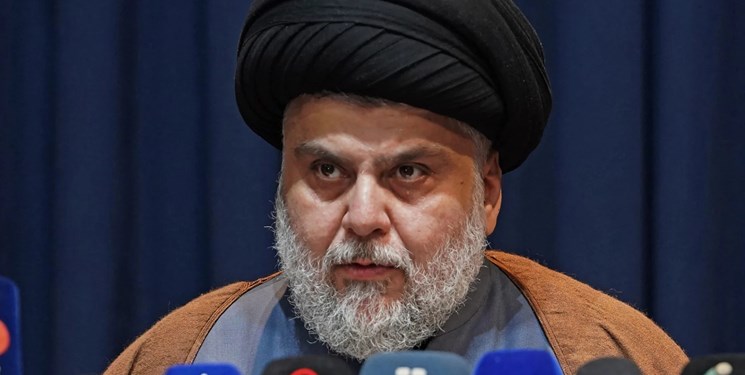 TEHRAN (FNA)- Prominent Iraqi Shia cleric Muqtada Al-Sadr on Wednesday said the Islamic Republic of Iran has never meddled in the internal political affairs of Iraq and has not put pressure on any Shia group in the Arab country, dismissing insinuations fanned by rabble-rousers.

According to a report published by the official Iraqi News Agency, the 47-year-old leader of the Sadrist political party stressed that Tehran has never imposed anything on any Shia group in the neighboring country.

He rejected “false” and “untrue” claims that his party members withdrew from Iraq's Council of Representatives under threat from Iran.

On June 11, lawmakers loyal to Sadr resigned from the Iraqi parliament in order to break a political deadlock that has prevented the establishment of a new government nearly eight months after last parliamentary elections.

The Iraqi News Agency reported at the time that members of the movement handed in their resignations in Al-Hannana, the headquarters of the political party in the holy city of Najaf.

Earlier, Sadr had called on all lawmakers loyal to him to “pen down their resignation”, stressing that they "won’t disobey me".

“The country’s reform will only take place with a national majority government,” he stated in a televised statement on Thursday, adding, “If the survival of the Sadr bloc is an obstacle to the formation of the government, then all representatives of the bloc are ready to resign from parliament.”

“Iraq needs a government backed by a majority that serves the people,” the prominent cleric continued.

In the parliamentary elections held last October to elect the 329 members of the Council of Representatives, the Sadrist political bloc secured most seats - 73.

The Fatah (Conquest) Alliance – the political arm of the Popular Mobilization Units (PMU) -- won 17 seats, down from 48 it had won in the previous election.

Despite Sadr’s impressive show in the election, Iraqi law requires a super-majority, namely two-thirds of the vote, to elect a president.

According to Iraq's electoral law, when a member of the parliament resigns, the electoral commission replaces him with the candidate who is placed second in the same electoral circle.

The Iraqi parliamentary elections held in October last year were the fifth since the US-led invasion of the Arab country in 2003.

They were originally planned to be held in 2022, but the date was preponed in the wake of mass protest movement that broke out in 2019 to call for economic reforms, better public services, and an effective fight against unemployment and corruption in state institutions.

The Sadr movement had formed an alliance with the Kurdistan Democratic Party (KDP), led by Masoud Barzani, and other parties to form a coalition.

The movement, however, failed to find common ground with its rival, the Coordination Framework.