Iran, Russia Discuss Expansion of Economic Ties to Stand against US Sanctions 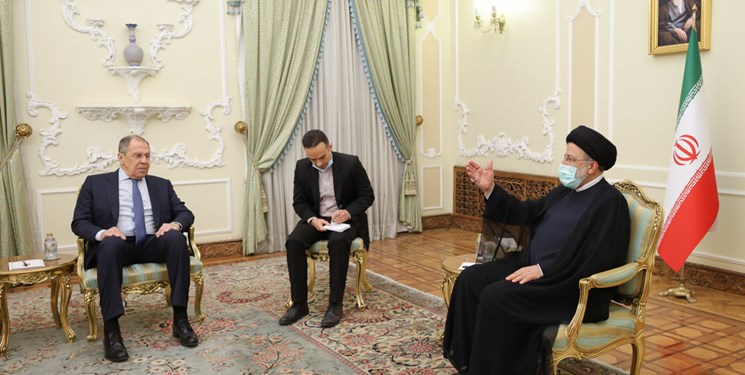 TEHRAN (FNA)- Iranian President Seyed Ebrahim Rayeesi stressed the need for increased efforts to strengthen cooperation between Tehran and Moscow, specially in economic fields, to beat back the US sanctions.

President Rayeesi made the remarks in a meeting with visiting Russian Foreign Minister Sergei Lavrov in Tehran on Wednesday.

He noted that constant meetings and talks between Iranian and Russian officials indicate the two countries’ firm determination to open a new chapter of fruitful and strategic cooperation, particularly in the economic sector.

“Strengthening cooperation and coordination is an effective way to counter US sanctions and economic unilateralism against independent nations,” the Iranian president said.

Tehran and Moscow both have huge oil and gas reserves but are constrained by sanctions that limit their ability to export their output.

Russia was slapped with sanctions following its operation in neighboring Ukraine, while Iran’s economy has been under draconian sanctions re-imposed by the US in 2018, following Washington’s withdrawal from the 2015 accord with Tehran.

Rayeesi also stressed the importance of cooperation among the Caspian Sea littoral states, and said foreign powers are not allowed to have a military presence in this region.

Elsewhere, he warned against attempts to expand the North Atlantic Treaty Organization (NATO)’s influence in different parts of the world, blaming the provocative acts of the US and the military alliance that it leads as the root cause of the ongoing conflict in Ukraine.

“There is no doubt that the US and NATO provocations have been the factor behind these conflicts [in Ukraine], and therefore it is necessary to be active in the face of attempts to expand NATO’s influence in any part of the world, including in West Asia, the Caucasus and Central Asia,” Rayeesi said.

He stressed the importance of ending the war in Ukraine as soon as possible, and expressed the Islamic Republic’s readiness to help find a diplomatic solution to the crisis.

Lavrov, for his part, said Russia is keen to elevate cooperation with Iran to a strategic level.

Pointing to the significance of Iran’s membership in the Shanghai Cooperation Organization, the Russian foreign minister added that his country supports Tehran’s role in regional and international organizations.

Russia launched a military operation in Ukraine in late February, following Kiev’s failure to implement the terms of the Minsk agreements and Moscow’s recognition of the breakaway regions of Donetsk and Luhansk.

At the time, Russian President Vladimir Putin said the goals of what he called a “special military operation” were to address Russia's security concerns and to “de-Nazify” Ukraine.

The war in Ukraine has inflamed tensions between Russia and the West, with the US and its NATO allies imposing unprecedented sanctions on Moscow and supplying a large cache of weaponry to Ukraine.