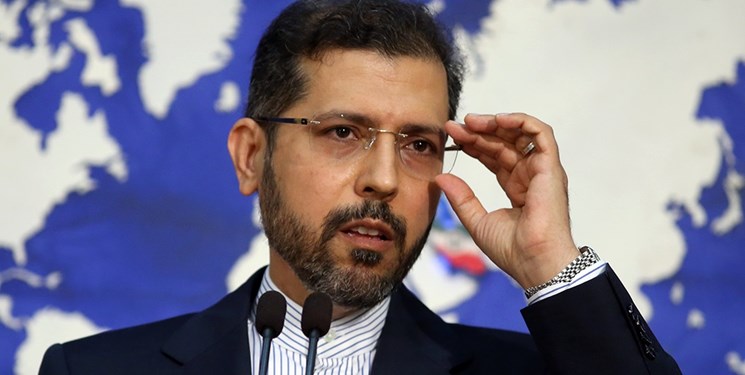 TEHRAN (FNA)- The Iranian foreign ministry rejected the allegations raised by Israeli Foreign Minister Yair Lapid against Tehran during his visit to Turkey, and said that Ankara is well aware of the baseless nature of his remarks.

Lapid had claimed in a joint press conference with his Turkish counterpart Mevlut Cavusoglu in Turkey on Thursday that Iran was behind attempted terrorist attacks against Israelis in the Turkish metropolitan city of Istanbul.

In a statement on Friday, Iranian Foreign Ministry Spokesman Saeed Khatibzadeh said the allegations fall within the framework of a plot orchestrated by the child-murdering and rogue regime aimed at sowing discord between the two neighboring Muslim countries.

“Unfortunately, a psychological operation started nearly a week ago to preoccupy media outlets with fictitious scenarios, using erroneous and biased information. It sought to prepare the ground for the Israeli foreign minister's projective scenario,” he stated.

“Turkey is well aware of the baseless nature of claims made by the representative of the deceitful [Israeli] regime and Zionist terrorists. It is expected not to remain silent in the face of these divisive comments. The regime has repeatedly shown how unreliable it is.”

Khatibzadeh went on to assert that the Islamic Republic of Iran determinedly and strongly responds to any Israeli act of terror and sabotage without threatening ordinary citizens and the national security of other countries.

“No one would ever believe in the Israeli regime’s false allegations of being subject to oppression other than itself. Even if some parties, due to temporary expediency, express support, they actually know what a dangerous regime they are faced with,” the spokesman said.

Israel has been involved in a string of sabotage attacks on Iran's nuclear facilities in recent years and has killed many top nuclear scientists and military officials in cowardly strikes.

More recently, on May 22, IRGC colonel Sayyad Khodayee was shot dead outside his home in East Tehran. Iranian officials blamed it on Israel and vowed strong retaliation.

The New York Times on May 25 cited an intelligence official as saying that Israel had informed American officials that it was behind the assassination.

It also cited Israeli officials who claimed that Khodayee was allegedly involved in planning cross-border plots against Israelis.