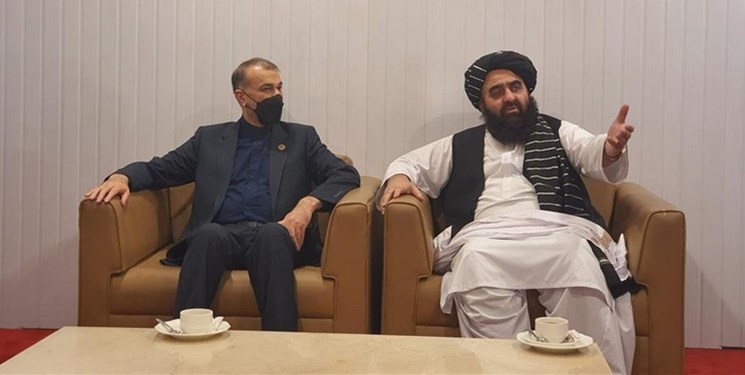 During the conversation on Friday, Amir Abdollahian conferred on the long-standing dispute over shared water resources with the Afghan official, making a “serious demand” for settlement of the dispute in line with the agreement between the two sides, the foreign ministry statement noted.

He said the resolution of the dispute would help in enhancement of bilateral cooperation and amity between the two countries.

Muttaqi welcomed the continuation of consultations on the matter as well as dispatching of an expert team by the Iranian government that would pursue the issue.

The top Iranian diplomat had last month warned that Iran will take legal measures if the Taliban fail to secure its water rights “because the supplement of Iran’s water rights from Hirmand [River] plays a decisive role in our strategic policy towards Afghanistan’s acting Taliban government”.

Days after his statement, a member of the Iranian parliament’s national security and foreign policy committee announced that a delegation will travel to Afghanistan to hold talks with the Taliban officials on the water-sharing dispute and other issues.

The two neighboring countries have been locked in a protracted water dispute, which has prevented them from realizing the vast potential of their bilateral trade ties.

At the heart of the dispute is the Hirmand River, which originates in the Hindu Kush Mountains near Kabul and flows 700 miles (1,126 kilometers) south before flowing into Hamoun wetlands, located in Iran’s Sistan and Baluchestan province.

The two countries signed a water-sharing accord on the Hirmand River in 1973, under which Afghanistan pledged to deliver an average of 820 million cubic meters of water per annum to Iran.

Iran has repeatedly criticized Afghanistan for failing to honor the agreement in letter and spirit.

What has made the dispute bitter is the construction of many hydroelectric projects on the river, most importantly the Kamal Khan dam in Nimrouz province, and the Kajaki dam 100 miles (160 km) northwest of Kandahar province.

Elsewhere in the conversation, Amir Abdollahian said the country is prepared to provide more medical assistance to Afghanistan in the wake of the devastating earthquake that has killed over 2,000 people and caused incalculable collateral damage.

He extended his condolences on behalf of the government and the people of Iran over the catastrophic tragedy, the saying that Iran immediately dispatched two cargo planes carrying first aid supplies to its neighbor after the disaster.

“Like in the past, we stand by Afghanistan’s honorable and patient people,” he said, vowing continued support to the crisis-stricken South Asian country, bordering Iran.

The top Iranian diplomat also referred to the deployment of 18-member team of medical experts from the Iranian Red Crescent Society to Afghanistan in the aftermath of the quake, saying “[we] are prepared to send over [another] medical team if need arises”.

Muttaqi, for his part, expressed gratitude to the Islamic Republic for its sympathetic stance and provision of assistance to the disaster-stricken people in Afghanistan.

“In the current circumstances, provision of shelter for the quake-hit people is very important,” he noted.

A 5.9-magnitude earthquake struck about 44 kilometers (27 miles) from the eastern Afghan city of Khost, early on Wednesday, which local officials described as the deadliest earthquake to hit the country in two decades.

The disaster poses fresh challenge to Afghanistan’s new rulers and relief agencies that are already struggling with a rapidly worsening humanitarian crises precipitated by the botched exit of US-led foreign forces last year and freeze on Afghan assets.

According to aid agencies, around 19 million Afghans — nearly half of the country's population — are grappling with severe food shortages in a crisis that aggravated dramatically since the US-led foreign forces withdrew last August.

The Biden administration’s decision to freeze Afghanistan's nearly $9 billion assets and distribute some part of it as compensation to the victims of the 9/11 attacks has been strongly denounced by human rights activists.

Iran's Ambassador and Permanent Representative to the United Nations Majid Takht Ravanchi on Thursday urged the US to unfreeze the nearly $9.5 billion in assets belonging to the Afghan central bank.

“As we have repeatedly stated, Afghanistan's frozen assets belong to the Afghan people, and their release, which is crucial for helping the Afghan economy and saving lives, should not be politicized or conditional in any way,” he said in an address to the UN Security Council on the situation in Afghanistan.