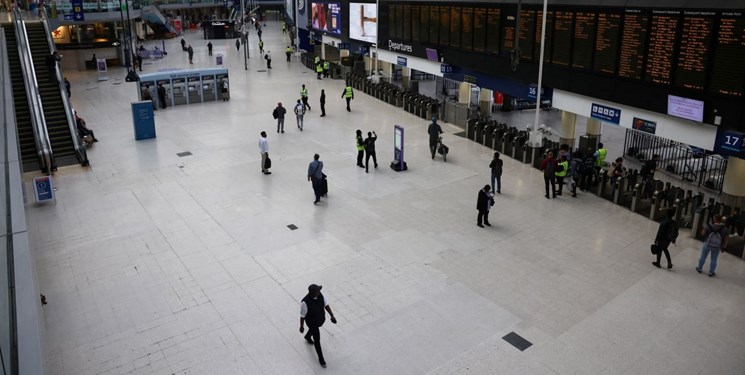 TEHRAN (FNA)- Passengers across Britain face a weekend of disrupted train services as the third and final 24-hour leg of the biggest rail strike in 30 years takes place on Saturday.

Rail firms have repeated pleas for people to avoid travelling unless necessary, with only about 20% of trains expected to operate in a limited window. Despite the strikes, frequent services were still able to operate on Saturday morning, The Guardian reported.

However, Sunday services will start later and be slightly reduced. Passengers with advance tickets will be allowed to use them until Tuesday or get a full refund.

While many commuters have opted to work from home in the week, leaving many of the few trains running only partially occupied, train firms anticipate busier services at the weekend.

Some have explicitly urged passengers to stay away from their services, with TransPennine telling anyone going to events such as the Test cricket match in Leeds to use alternative transport.

However, Great Western Railway is expecting to run 11 direct specials to return festivalgoers from Glastonbury to London on Sunday.

On Saturday, 40,000 members of the RMT union went on strike in a dispute over pay and conditions on the railways. Rail revenues remain about £2bln short of pre-pandemic levels and the government has told Network Rail and train operating companies to find savings through “modernisation” to fund pay deals.

The union has been offered a package worth 3% but inflation reached 9.1% – or 11.7% on the measure usually used to determine rail salaries – this week.

The RMT General Secretary, Mick Lynch, told Sky News on Saturday morning that “there’s a long way to go yet” in the talks, which are due to continue in London.

He said, “They’ve given us a lot of detail about what they want from what they might call the new modern railway; what we don’t know is how our members are going to respond to that.

“So there’s a long way to go yet. But most of the stuff that our members voted very heavily in favour for action about are what’s on the table now and they’ve not diluted very much the stuff that they want.”

Network Rail has said it intends to push forward with changes to the maintenance regime under which 1,800 jobs would be lost, and it will make compulsory redundancies if necessary. The RMT has demanded that the threat be withdrawn.

Train operators are intending to “repurpose” all ticket offices within 18 months to save costs, with customers expected to buy tickets online or via a machine.

Unions and Labour have called on the government to join direct talks but the transport secretary, Grant Shapps, has insisted it is a matter for the employers.

The RMT has yet to call further strikes, but train drivers from the Aslef union will strike next week on Croydon tram services and next weekend on Greater Anglia rail services. More strike ballots are being held by the TSSA union.

“It’s likely unless we get a lot of movement provided by the government that the companies can change their stance that there will be more action, yes,” Lynch said.

“We’ve not named dates. We’re going to review where we are in the discussions next week, and then we will decide if we need to take more action,” Lynch added.

Unions have to give two weeks’ notice of any new industrial action by law, meaning there will not be any strikes over the next 14 days.

London Underground workers may strike again this summer after voting to renew the strike mandate for another six months.

Shapps said the RMT’s action was “hurting the very people they claim to stand up for”.

He said, “This week has also shown that overall rail strikes are not as effective a tool for the unions as they once were. The only chaos these strikes are causing isn’t on our transport system but on the day-to-day lives of hardworking people and for businesses around the country."

“Rather than standing on picket lines, union representatives should be back around the negotiating table and agree a deal to bring our rail industry into the 21st century,” he added.

As a weekend of travel chaos looms this weekend, 83 percent of The Independent readers say they support the train strikes, according to a poll.

The RMT Union voted for a strike over pay, redundancies and “a guarantee there will be no detrimental changes to working practices”.

One reader, commenting under the name Itolduso, wrote, “The strike has interrupted an important family event on Saturday but I am still 100 percent behind the RMT.”

Another commenter Avigail said, “I support the strikes, if anything because they are a way to show us that things aren’t working. Strikes are like symptoms in our society in the same way that people have symptoms in mental or physical health. Strikes might be annoying to some and uncomfortable, but like all symptoms they are there to tell us that something is wrong. It is not enough to negotiate and maybe remove a symptom by ending this or that strike. If the causes are not dealt with, more symptoms will inevitably appear in the form of more strikes and in other ways too. Our politicians are not well-developed people and are not fit to govern.”

A reader with the commenting name Whatservices added, “I support the strike, as the damage of reducing wages over the last decade and growing destitution and poverty spreading into the middle classes is becoming more of a serious issue than inflation. History reveals time and time again that poverty always increases and the take home wage for ordinary working people falls whenever the Conservatives are in power, and this is truer and more damaging within the UK today. In contrast, the wealth of the wealthiest keeps increasing excessively.”