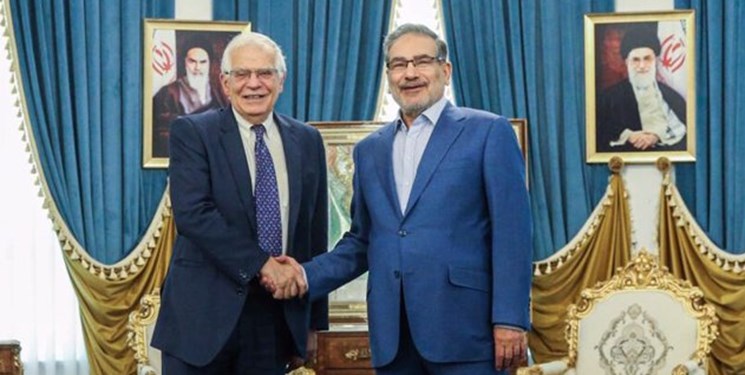 TEHRAN (FNA)- Secretary of Iran’s Supreme National Security Council (SNSC) Ali Shamkhani said that his nation has lost trust in the West after the US withdrawal from the nuclear deal, and reiterated that removal of sanctions and guarantees for enjoying benefits of the JCPOA are Tehran’s main principles in talks with powers.

US withdrawal from the deal, officially known as the Joint Comprehensive Plan of Action (JCPOA), has caused the Iranian nation to lose trust in the West and Washington, Shamkhani said in a meeting with European Union foreign policy chief Josep Borrell in Tehran on Saturday.

"We have fulfilled all our commitments under the JCPOA and have never left the negotiating table and we are still looking for a strong, lasting and reliable agreement," he said.

Shamkhani emphasized that the removal of illegal sanctions and full and lasting realization of the economic benefits of the JCPOA are Iran's main objectives in engaging in the talks with the G4+1 group of countries in the Austrian capital of Vienna.

"Iran does not favor an agreement that fails to meet the two above-mentioned principles in providing a reliable guarantee from the US and Europe," he said.

He emphasized that the participants in the Vienna talks failed to reach a final agreement on the JCPOA revival because of the US' contradictory behavior and its sticking to threats and sanctions.

"The language of force cannot be used in addressing a country that has overcome the most difficult conditions of sanctions with vigorous resistance and the sympathy and support of its people," the SNSC secretary said.

"Iran's remedial measures in the nuclear sector are merely a legal and rational reaction to US unilateralism and Europe's inaction and will continue as long as the West's illegal practices persist," Shamkhani said.

Negotiations have been held in the Austrian capital of Vienna since April last year to restore the JCPOA, which was ditched by former US President Donald Trump in May 2018.

The senior EU diplomat, for his part, said the possible JCPOA revival under the current global circumstances can be regarded as a very important security achievement in the international system.

Borrell criticized Trump for pulling the United States out of the multilateral agreement and said all the parties to the JCPOA must look ahead to the future to reach a good final deal.

Pointing to his talks with US officials before traveling to Tehran, he added that the administration of Joe Biden is keen to reach an agreement on the JCPOA revival.

Addressing a joint press conference with Borrell earlier in the day, Iranian Foreign Minister Hossein Amir Abdollahian said Tehran is ready to resume the stalled talks with the G4+1 group of countries in Vienna to revive the 2015 deal.

"We are ready to resume the Vienna talks within the next days," Iran's top diplomat said.

In quitting the agreement, Trump unleashed what he called the “maximum pressure” campaign to bring Iran to its knees. Tehran maintains that the policy has failed dismally. The Biden administration agrees, yet it has not taken any tangible steps to deliver on its promise of repealing the policy.

In recent months, Iran has cited Washington’s indecisiveness as the reason behind the protraction of the talks, as a number of key issues remain unresolved, ranging from the removal of all post-JCPOA sanctions to the provision of guarantees by the American side that it will not leave the deal again.