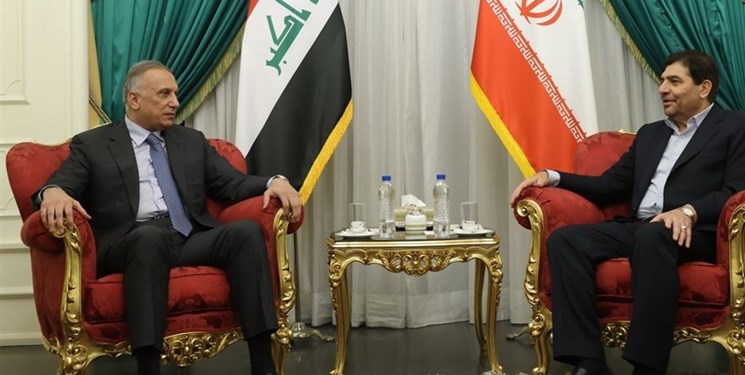 TEHRAN (FNA)- Iran's First Vice-President Mohammad Mokhber said that the enemies are afraid of convergence between the Iranian and Iraqi nations and governments.

Mokhber made the remarks in a meeting with Iraqi Prime Minister Mustafa Al-Kadhimi in Tehran on Sunday.

Iranian officials and nations attach great importance to the independence, prosperity, stability, and security in Iraq, he added.

Mokhber referred to the deep-rooted relations between Tehran and Baghdad, and stressed that the enemies are afraid of the convergence of the two governments and nations of Iran and Iraq.

Iran and Iraq must be aware of the provocations of the ill-wishers who seek to divide the two nations, he said, adding that certainly, the historical and religious solidarity between Iranian and Iraqi nations has been always a great obstacle against the malicious conspiracies of the two nations.

Elsewhere in his remarks, Mokhber praised the efforts and measures of the Iraqi Prime Minister and the Government in terms of facilitating the issuance of visas, stressing that visa-free trips can lead to the expansion of relations and increased travel between the people of the two countries.

Al-Kadhimi, for his part, referred to the many historical, religious, and cultural commonalities between Iran and Iraq, and said there are great grounds for cooperation between the two countries.

He added that the Iraqi government is determined to implement the agreements as soon as possible.

During the meeting, the two sides also exchanged views on removing obstacles and accelerating the agreements previously agreed upon between the two countries.

In relevant remarks on Sunday afternoon, Al-Kadhimi underlined Baghdad's determination to further expand relations and cooperation with Iran as a priority of his country's foreign policy.

Al-Kadhimi made the remarks in a meeting with Iranian Foreign Minister Hossein Amir Abdollahian in Tehran.

He ensured the Iranian foreign minister that Baghdad will continue its efforts to strengthen regional dialogue and cooperation.

Al-Kadhimi said that the role and status of the Islamic Republic of Iran in regional developments are quite close to Iraq’s.

He said that Baghdad attaches great importance to its relations with Tehran, and will continue its regional mediation role.

Amir Abdollahian, for his part, told Al-Kadhimi that Iran is a well-wisher of the regional countries, and supports Baghdad’s constructive efforts to strengthen dialogue in regional equations.

He also referred to the ongoing ceasefire in Yemen, and voiced Iran’s support for its continuation and the end of the inhumane siege of the Yemeni nation.

Amir Abdollahian said that the solution to the regional crises is to be sought inside the region.

He appreciated Iraq’s constructive efforts aimed at strengthening the dialogue factor in regional equations, particularly in the process of Iran-Saudi dialogues.

Amir Abdollahian said that the Islamic Republic of Iran is a well-wisher of the entire regional nations, and supports reopening of the two countries’ embassies.

The foreign minister also referred to Iran’s abundant commonalities with Egypt, arguing that strengthening Tehran-Cairo relations, too, is to the benefit of the region and the Islamic world.

The two sides also reviewed the latest regional developments and exchanged views on bilateral ties and issues of mutual interest.