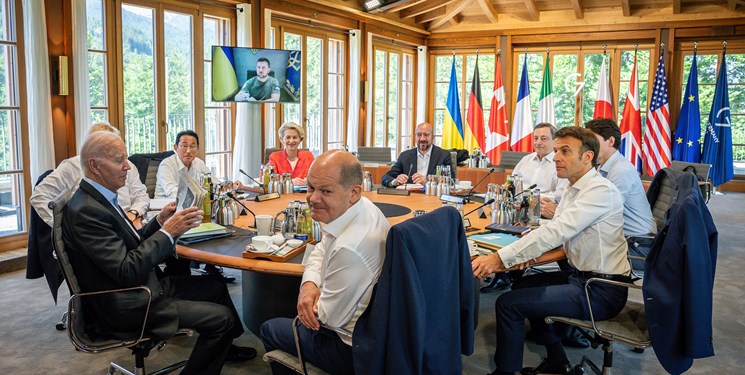 TEHRAN (FNA)- Ukrainian President Volodymyr Zelensky told G7 leaders he wants the war in Ukraine to finish by the end of 2022, according to a source familiar with his remarks.

Zelensky delivered the message virtually at the Group of 7 summit on Monday, which is taking place at the Schloss Elmau castle in the Bavarian Alps, CNN reported.

He called for a major push to end the war before the winter sets in in several months' time, the source stated.

The message was as clear a sign as Zelensky has given about how he sees the trajectory of the war.

Zelensky, who is also planning to address this week's NATO summit in Madrid, has pressed the West for accelerated sanctions on Moscow and heavy artillery to beat back the Russian forces.

A European official who spoke to Reuters news agency said Zelensky asked for anti-aircraft defence systems, more sanctions on Russia and security guarantees as he addressed leaders of the Group of Seven summit.

Addressing the summit in the Bavarian Alps via video link, Zelensky also asked for help to export grain from Ukraine and for reconstruction aid, the European official added, speaking on condition of anonymity.

So far, leaders have decided on new steps to isolate Russia's economy, including a ban on new imports of Russian gold, and are discussing ways to further limit Moscow's energy profits by applying a cap on the price of Russian oil.

Yet how much further leaders will be willing to go in applying new sanctions on Russia remains to be seen.

On February 24, President Vladimir Putin stated in response to a request by the heads of the Donbass republics he had made a decision to carry out a special military operation. The Russian leader stressed that Moscow had no plans of occupying Ukrainian territories.

The US, the EU, the UK and a number of other states have imposed sanctions against Russian legal entities and individuals. They also increased supplies of weapons to the Ukrainian authorities.