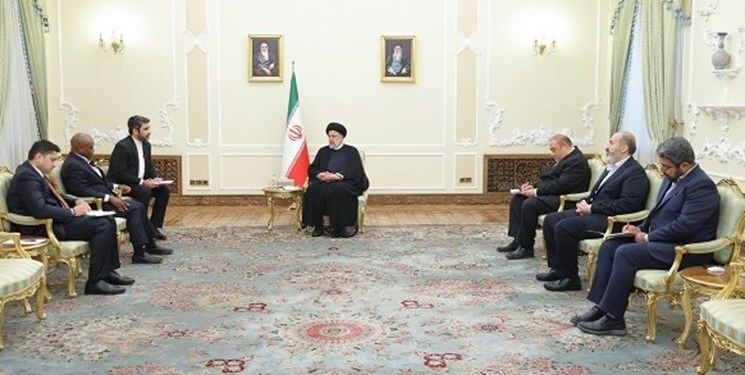 TEHRAN (FNA)- Iranian President Seyed Ebrahim Rayeesi in a meeting with Secretary-General of the D-8 Organization for Economic Cooperation Isiaka Abdulqadir Imam called for increasing the trade volume among the D8 member-states.

The Iranian president stressed Iran's policy is base on cooperation with regional and international organizations, adding that there is a lot of neglected potential in the D8 countries for increasing trade and transit of goods.

"The United States does not want developing countries to grow, and it wants them to be dependent on the hegemonic powers somehow," the Iranian president said.

Isiaka Abdulqadir Imam, for his part, described Iran as an active member of D-8, and said that two important institutions of the organization are located in Tehran and Hamedan.

He described the consideration of population capacity for the member-states of the D-8 organization and the increase of trade exchanges between the members as his two important management approaches.

The D-8 Organization for Economic Cooperation, also known as Developing-8, is an organisation for development cooperation among the countries, including Bangladesh, Egypt, Indonesia, Iran, Malaysia, Nigeria, Pakistan, and Turkey.

The objectives of D-8 Organization for Economic Cooperation are to improve member states' position in the global economy, diversify and create new opportunities in trade relations, enhance participation in decision-making at international level, and improve standards of living. D-8 is a global arrangement rather than a regional one, as the composition of its members reflects.

Organization for Economic Cooperation (D-8) is a forum with no adverse impact on bilateral and multilateral commitments of the member countries, emanating from their membership to other international or regional organizations.