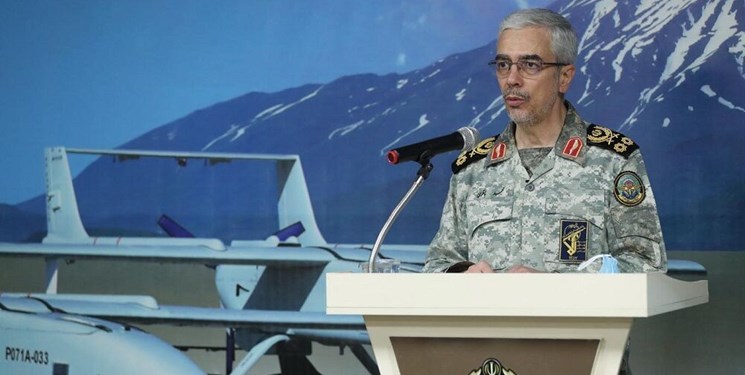 TEHRAN (FNA)- Chief of Staff of the Iranian Armed Forces Major General Mohammad Baqeri described Israel’s moves and mischiefs as serious danger to the region, saying that Tehran will not tolerate the Zionist regime’s threats.

Israel is at the core of all intrusions and destabilizing moves in the region, General Baqeri said in a meeting with his Pakistani counterpart Lieutenant General Nadim Reza Nishan in Tehran on Monday.

“The regime, through the implementation of certain plots, seeks to forge relations with regional countries and achieve its interventionist goals,” he added.

General Baqeri went on to say that Israel’s accession to the CENTCOM, deployment of its military equipment, and its participation in military drills will constitute greater and more serious threats to the region.

“We (Iran) do not tolerate these threats and we will certainly respond to them,” he said.

“The emergence of terrorist and Takfiri groups in the region, especially in Syria and Iraq, were among other projects developed and encouraged by the United States and the Zionist regime in the region. In their pursuit of colonial objectives, they advanced to the brink of toppling both governments,” General Baqeri said.

The senior Iranian commander also demanded an immediate end to the ongoing tragedy in Yemen.

He expressed the hope that both sides would resolve the conflict through dialogue and negotiations.

General Baqeri described Afghanistan as one of the most important areas of concern for both Iran and Pakistan, emphasizing that the inclusion of various ethnic groups will play a constructive role in the establishment of security and stability in the country.

“We are concerned about the growth of terrorism in Afghanistan. We have devised relevant plans, as we believe that these issues can be resolved through cooperation between Iran and Pakistan and that there is no need for foreign interference.”

The high-ranking generals from Iran and Pakistan also weighed plans to promote military and security cooperation between the two neighbors.

In recent years, Iran and Pakistan have stepped up military cooperation and have held a number of joint naval exercises.

General Nadim Reza arrived in Tehran on Sunday at the official invitation of Major General Baqeri, with the aim of expanding bilateral cooperation in order to establish lasting security in the region and increase military interactions and joint educational and security cooperation.

The chairman of the Joint Chiefs of Staff of the Pakistan Army is also scheduled to meet with other senior Iranian military officials during his trip.