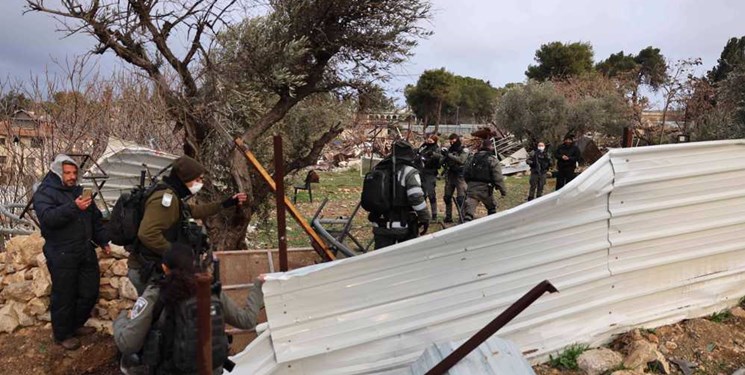 TEHRAN (FNA)- A new report revealed that Israeli authorities confiscated more than 25,000 dunums of Palestinian-owned land and uprooted 17,755 trees across the West Bank last year, as the Tel Aviv regime presses ahead with its land grab policies in the occupied territories.

The LRC announced that the Palestinian lands were seized by Israel either for military purposes or settlement expansion.

The center added at least 86 other wells and water reservoirs are currently under threat of destruction by military orders.

Israel continues to steal water by curbing Palestinian access to it, while increasing the control of extremist settlers over water resources across the occupied territories.

In November 1967, Israeli authorities issued a military order, which stated that Palestinians could not construct any new water installation without first obtaining a permit from the Israeli army. These are nearly impossible to obtain.

The acts of violence and vandalism, known as price tag attacks, committed by Israeli settlers against Palestinians and their property, have risen in recent years.

Various attacks on Palestinian property, including arson and graffiti, have also become a daily occurrence throughout the occupied territories, particularly in the West Bank.

Elsewhere in the report, the LRC noted 74 Israeli settlements dump their wastewater at Palestinian agricultural land, damaging vast tract of Palestinian land, many of which are planted with olive trees.

Israel has already occupied thousands of dunums of Palestinian agricultural lands to construct and expand new settler units in various areas in the West Bank. In recent year, Israel has accelerated settlement expansion on an unprecedented scale.

In addition, Israel routinely demolishes Palestinian houses in the occupied West Bank and East Al-Quds, unjustifiably claiming that the structures have been built without permits while such permits are almost impossible to obtain.

They sometimes order Palestinian owners to either demolish their own houses or they have to pay the demolition costs.

The Tel Aviv regime also plans to force out Palestinian families from the Sheikh Jarrah and several others neighborhoods of East Al-Quds in an attempt to replace them with settlers. That plan sparked days of fighting between Gaza-based Palestinian resistance movement Hamas and the Israeli regime in May last year.

More than 600,000 Israelis live in over 230 settlements built since the 1967 Israeli occupation of the Palestinian territories of the West Bank and Al-Quds.

All Israeli settlements are illegal under international law. The United Nations Security Council has condemned Israel’s settlement activities in the occupied territories in several resolutions.

Palestinians want the West Bank as part of a future independent state, with East Al-Quds as its capital.