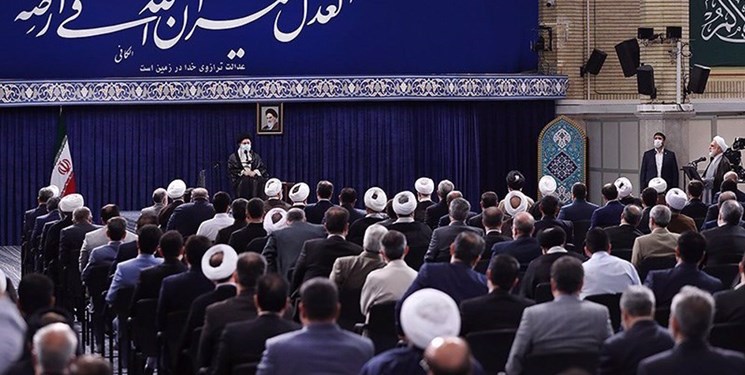 TEHRAN (FNA)- Supreme Leader of the Islamic Revolution Ayatollah Seyed Ali Khamenei called on the judiciary officials to put serious fight against corruption on agenda as a priority.

Ayatollah Khamenei made the remarks on Tuesday, addressing a group of judiciary officials, personnel and staff in Tehran.

Elsewhere, he hailed the Iranian people’s resistance against the enemies’ pressures, and said over the past four decades, the enemies have been hoping that certain weaknesses and shortfalls would eventually result in the collapse of the Islamic Republic, but the Iranian people have dashed their hopes time and again.

Ayatollah Khamenei said the Iranian people's resilience, their endeavors and a refusal to be intimidated are what make them victorious vis-a-vis the enemies.

After being appointed last July, Iran’s Judiciary Chief Gholam Hossein Mohseni Eje’i underlined implementation of the Transformation Document in the judicial system, saying that fighting corruption will be pursued more seriously under his leadership at the country's judicial system.

"The axis of the judiciary is the implementation of the Transformation Document and this period is the period of transformation and excellence and we should have long and leaps and bounds with the unity and integrity of all officials, cooperation of the three branches of the government, military and law enforcement forces," Mohseni Eje’i said.

He appreciated the Leader for trusting and electing him as the chief of the Judiciary, expressing readiness to pursue this serious responsibility with “strength and power in order to serve the system and the people and values”.

"Promotion of justice in all areas, more decisive and non-discriminatory fight against corruption in all areas, development of technology to serve people better and cheaper and in some cases even free of charge for them, maximum use of the popular capacity for the prevention of crime, the reduction of judicial cases and violations in the judiciary branches, peace, and reconciliation, and the establishment of a mechanism for the expansion of legitimate freedoms is the most targets of the Judiciary Branch," Mohseni Eje’i said.

Also, last November, Iranian President Seyed Ebrahim Rayeesi vowed that he has no redline in fighting corruption, even in dealing with his colleagues and ministers.

"I do not have any redlines; neither my chief of staff, nor my deputies and ministers. None of them is a redline for me," Rayeesi said, addressing a cabinet meeting in Tehran.

He added that fighting corruption was a stipulation implied by the people voting for him in the June presidential election in Iran.

Rayeesi said that hiring and appointment of human forces and directors in the government is a potential ground for corruption, instructing his cabinet members to focus only on qualification in hiring.