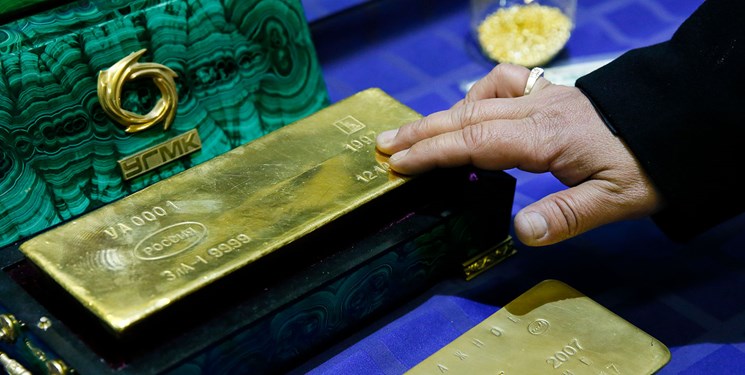 TEHRAN (FNA)- The US government has banned the importation of gold of Russian origin in the United States as part of its latest round of anti-Russia sanctions, the Treasury Department Office of Foreign Asset Control (OFAC) announced in a press release on Tuesday.

"The Director of OFAC, in consultation with the Department of State and the Department of Commerce, determined that the prohibitions of section 1(a)(i) of E.O. 14068 shall apply to gold of Russian Federation origin, with immediate effect," the release said, Sputnik reported.

"As a result, the importation into the United States of gold of Russian Federation origin is prohibited, except to the extent provided by law, or unless licensed or otherwise authorized by OFAC," it added.

In a separate development, the United States has authorized transactions with some previously blocked Russian entities in order to ensure safety of civil aviation.

"[A]ll transactions ordinarily incident and necessary to the provision, exportation, or reexportation of goods, technology, or services to ensure the safety of civil aviation involving one or more of the blocked entities listed in the Annex to this general license and that are prohibited by Executive Order (E.O.) 14024 are authorized," the Treasury Department said in a statement.

In addition, the Treasury Department authorization includes all transactions involving the Russian Federal Security Service, according to the statement.

The Treasury Department also said in its statement released on Tuesday US authorities again expanded the sanction lists against Russia.

The Department "designated 70 entities, many of which are critical to the Russian Federation’s defense industrial base, including State Corporation Rostec, the cornerstone of Russia’s defense, industrial, technology, and manufacturing sectors, as well as 29 Russian individuals," the Treasury announced.

"Today’s designations were taken in tandem with the U.S. Department of State, which is imposing sanctions on an additional 45 entities and 29 individuals," the Treasury Department added.

US President Joe Biden has long been pushing Europe to take a stance against Russia. He placed an embargo on Russian oil earlier this year, shortly after President Vladimir Putin declared a military campaign against Ukraine on February 24.

In addition to the oil embargo, Washington and its Western allies imposed unprecedented waves of sanctions on Moscow.

The move has so far sent the prices of grain, cooking oil, fertilizers, and energy skyrocketing.