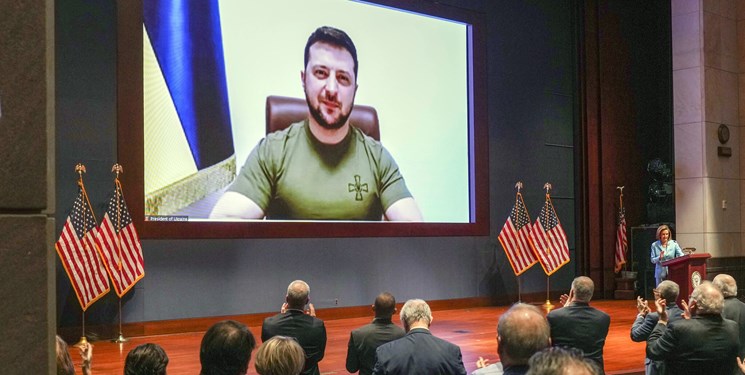 TEHRAN (FNA)- By initiating a meeting of the UN Security Council on Ukraine with President Vladimir Zelensky addressing it via video-link, Kiev is trying to create a favorable background to try beg the NATO summit for more weapons, Russia's First Deputy Permanent Representative to the UN Dmitry Polyansky wrote on his Telegram channel on Tuesday.

"As it has become known, the West pushed through the participation of Ukrainian President Zelensky via video link," Polansky said, TASS reported.

"The task of the Kiev regime is clear - to try to overcome 'Ukraine fatigue' in the West and create a favorable background in order to beg the participants in the NATO summit for more weapons," the diplomat wrote.

Zelensky was allowed to speak before the UN Security Council remotely and without prior consultations with other council members, which violates the existing practice, Polyansky said.

"We are seriously concerned over the stance of the Albanian Presidency with regard to participation of President Zelensky of Ukraine in this meeting. There have been no consultations with all Council members on this issue. The delegations were confronted with this fact at the last moment. This violates the existing practice and working methods of the Security Council," the Russian diplomat told the UN Security Council on Tuesday.

According to the established norms of the Council’s work, representatives of states willing to address the Council need to be physically present in the Security Council chamber, he said.

"The Security Council should not turn into a platform where President Zelensky, though remotely, can angle for more NATO weapons," Polyansky continued.

He said that the Ukrainian leader has already had an opportunity to address the Security Council "by means of exception and, as Great Britain in its capacity as President of the Council claimed, without creating any precedent".

"We see no reason why such an exception should be made again," the Russian first deputy UN envoy said.

During his speech, the Ukrainian leader urged the UN to designate Russia as a "terrorist state" and exclude it from the UN Security Council, where the country has the permanent member status.

Weapons supplied to Ukraine by the West and foreign mercenaries in the country are legitimate targets for the Russian armed forces, Polyansky said.

"The only thing Kiev wants from you is your money and your weapons. You must realize that the arms you deliver, as we warned you from the very start, are our legitimate military targets, just like mercenaries coming from your countries. Facilities where those weapons are stored and mercenaries deployed also become our legitimate military targets," he added.

In his words, "warehouses at the Kremenchug road-building machinery plant were exactly such targets."

"The Kiev regime deliberately stores weapons in central areas of Ukrainian cities, next to residential quarters, putting lives of civilians at risk and turning people into a human shield," the diplomat continued.

"No matter how hard you try to prove the opposite, we did not and do not target civil and non-military facilities," Polyansky added.

Russian Defense Ministry Spokesman Lieutenant-General Igor Konashenkov reported earlier on Tuesday that Russia’s Aerospace Forces had delivered strikes by precision weapons against hangars of US and EU weapons and ammunition in Kremenchug. The strike wiped out Western-made weapons and ammunition intended for their delivery to the Ukrainian battlegroup in Donbass, the general said. In his words, the detonation of the stored ammunition for Western weapons caused a fire at a defunct shopping mall located close to the factory’s territory.

Russia’s special military operation in Ukraine will continue until Ukraine stops shelling Donbass and until no threat comes from its territory, Polyansky said.

"We started a special military operation in order to put an end to bombardments of Donbas by Ukraine, and also to make sure that this country (that Western states helped to turn into an anti-Russia) and its nationalist leadership stop posing a threat to both Russia and people living in Ukraine’s Southern and South-Eastern areas. The special operation will continue until these goals are achieved," he said.

"By supplying your weapons, you only prolong the agony of the criminal Kiev regime that is ready to sacrifice its own population. The sooner you realize this, the sooner Ukrainian leadership comes to a negotiations table with a realistic position rather than pompous slogans and phantom pains," the Russian diplomat added.

"Lies about stolen Ukrainian grain, which we also heard today, fits into this logic perfectly well," he told the UN Security Council on Tuesday.