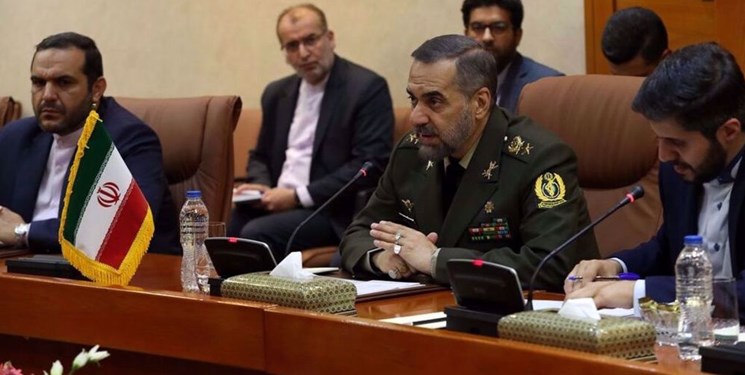 General Ashtiani made the remarks in a meeting with visiting Chairman of the Joint Chiefs of Staff Committee of Pakistan General Nadeem Raza in Tehran on Tuesday.

“We are still far from the desired situation (in the region),” he said.

“But there is no doubt that cooperation between Iran and Pakistan in various defense domains in such tense conditions can be an effective contribution to improving the security situation in the West Asian region.”

General Ashtiani also warned of attempts made by “meddlesome countries” to influence Tehran-Islamabad ties, saying Tehran attaches great importance to the deepening of relations with neighboring and regional countries.

Reza, said for his part, that Pakistan is looking for more areas where the two Islamic republics can cooperate.

He underscored the need to boost all-out bilateral ties.

Elsewhere in the meeting, the Iranian defense minister said that countries need to combat the root causes of the Ukraine crisis instead of trying to address the symptoms, says Iran’s defense minister, criticizing the “unconstructive” role of the US and Europe in the conflict.

Washington and its western allies pursue unilateral measures and seek total dominance over the world, he said.

“The principled policy of the Islamic Republic of Iran has always been to oppose war, killing of innocent people and civilians, and destruction of the infrastructure of countries anywhere in the world,” General Ashtiani said.

However, he went on, countries “need to be vigilant in identifying and combating the root causes of the crisis”.

Earlier this month, Supreme Leader of the Islamic Revolution Ayatollah Seyyed Ali Khamenei argued that the main problem concerning the Russia-Ukraine war is that the West means to expand the North Atlantic Treaty Organization (NATO).

Ayatollah Khamenei said the US and the West in general always seek to expand their dominance over the world and do not hesitate to scuttle the independence and sovereignty of other countries to reach that end.

Since the beginning of Russia’s “special military operation” in Ukraine, Iran has called for restraint and expressed support for any initiative aimed at ending the war. The country has also voiced its vehement opposition to the use of war and sanctions.