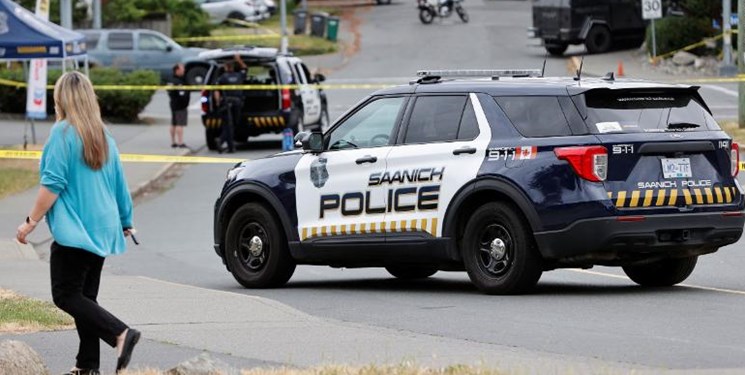 The suspects were killed after exchanging fire with police outside the bank in Saanich, according to Dean Duthie, the chief constable of the Saanich Police Department, CNN reported.

No one inside the bank was injured, Duthie said, noting it was one of the most violent scenes he's seen in his nearly 27 years of service in Saanich, which is a district municipality on Vancouver Island in the Greater Victoria area.

"What I know about that chaotic, tragic, dynamic, violent scene, the fact that no citizens were injured in any way is truly amazing," Duthie said.

Officers first responded to the scene around 11 am after receiving a report that two armed men had entered a bank.

Officers engaged the suspects outside the bank, Duthie said at a news conference. The suspects were heavily armed and believed to be wearing body armor, he said.

"A lot of shots were fired," said Joan Flood, a Saanich resident who told CNN she was in in her fourth-floor apartment across the street from the bank when the shooting happened.

Police officers gather at the scene of a shootout in Saanich, British Columbia, Tuesday.

"I heard a gunshot and I was standing and turned around in the living room and then saw the police coming up to the bank with guns drawn," she said.

Flood said as the scene unfolded, she saw a person fall to the ground and not get back up.

"As I was watching, a person came from behind the bank crouched over who definitely looked like they were hurt," she said, adding, "And they started to crawl and then they laid down and stayed that way."

Three of the injured officers were expected to be released from the hospital, while the other three were undergoing surgery with more serious injuries, Duthie said Tuesday.

Homes and businesses near the scene were evacuated because of a potential explosive device in a vehicle connected to the suspects, he added.