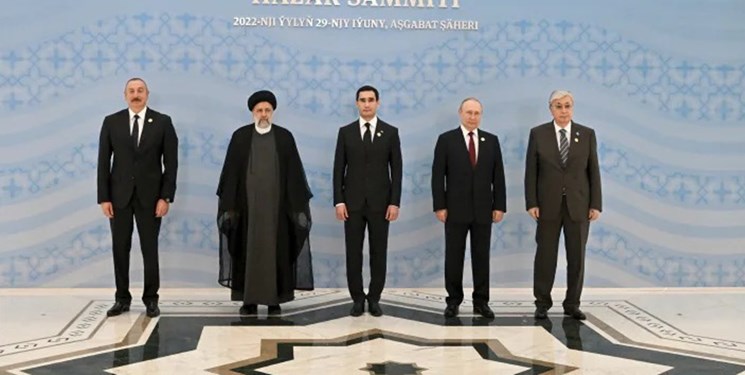 TEHRAN (FNA)- The five Caspian Sea littoral states in their summit in Ashgabat declared agreement on preventing deployment of foreign military forces in the region.

Iranian, Russian, Azeri, Turkmen and Kazakh presidents in a summit in Turkmenistan's capital, Ashgabat, on Wednesday conferred on regional cooperation and international issues.

In a communiqué after the meeting, they stressed their agreement to bar any foreign militaries from the Caspian. They also underlined a pledge not to offer the territory of their nations for aggression against another littoral country.

"The presidents, confirming adherence to the principles and norms of the United Nations Charter and international law, taking into account the increasing role of the Caspian Sea region worldwide, expressed the readiness of the Caspian states to maintain regional security and stability, boost mutually beneficial economic cooperation, ensure the ecologic safety and develop cultural, humanitarian, scientific and other ties," the document said.

The communiqué, containing 17 principles laid by the presidents, also emphasized the importance of cooperation in the military sphere among the Caspian nations.

According to the statement, the presidents reaffirmed that the activities of the littoral states in the Caspian Sea will be carried out on the basis of "non-presence in the Caspian Sea of armed forces that do not belong to the littoral states; non-provision by any coastal state of its territory to other states for the commission of aggression and other hostilities against any of the coastal states".

The principles also include "ensuring a stable balance of armaments of the littoral states in the Caspian Sea, carrying out military construction within reasonable sufficiency, taking into account the interests of all littoral states, not endangering each other's security".

The summit participants assured that they would proceed from "respect for the sovereignty, territorial integrity, independence, sovereign equality of states, non-use of force or threat of force, mutual respect, cooperation, non-interference in each other's internal affairs; the use of the Caspian Sea for peaceful purposes, turning it into a zone peace, good neighborliness, friendship and cooperation, resolution of all issues related to the Caspian Sea through peaceful means and ensuring security and stability in the Caspian region".

It was noted that the presidents discussed the most important issues of the five-party cooperation on the Caspian in a friendly and trusting atmosphere as well as the pertinent international and regional issues of mutual interest.

Additionally, the presidents emphasized the importance of the decisions of the previous Caspian summits and the necessity of their effective implementation.

"The presidents noted the existing high potential of comprehensive interaction and positively assessed the level of cooperation between the Caspian states," the communiqué concluded.

In 2018, the five countries signed a convention for exploitation of the Caspian Sea resources that ended decades of uncertainty.

Iranian President Seyed Ebrahim Rayeesi attended the 6th summit of the heads of the Caspian Sea littoral states in Ashgabat on June 29, 2022.

In his address to the summit on Wednesday, Rayeesi urged the participants to regard the Caspian Sea as a “sea of friendship and cooperation” in order to fulfill their responsibility “toward the current and future generations”.

“The Caspian Sea is our common heritage and capital, the axis of bonds and friendship, and the source of blessings for more than the 270 million people of its littoral countries, which reflects the five countries in the mirror of a single body of water,” he said.