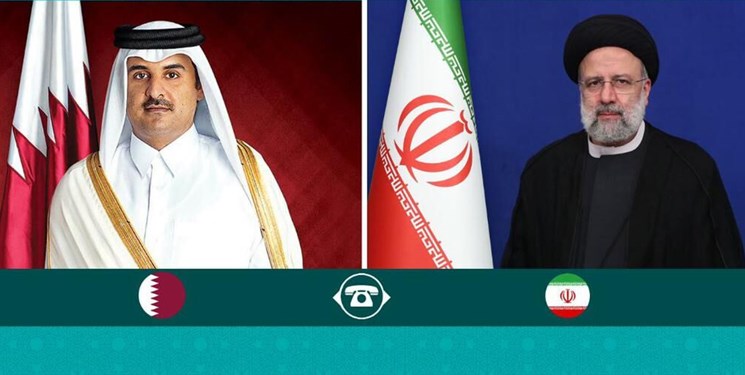 TEHRAN (FNA)- Iranian President Seyed Ebrahim Rayeesi underlined that the western countries' approach to the ongoing talks on removal of brutal sanctions imposed against the people of Iran shows that they do not adhere to serious and real negotiations in a bid to reach a good and enduring deal.

The Iranian president made the remarks in a telephone conversation with Qatari Emir Sheikh Tamim bin Hamad Al Thani on Thursday night.

"West's accusations against Iran at the same time as the talks are in progress shows that they do not adhere to the requirements of a serious and real negotiations," President Rayeesi said in his phone talk with Qatari emir.

The Iranian president, meantime, recalled the numerous and official reports by the International Atomic Energy Agency (IAEA) that the Islamic Republic of Iran's nuclear program is completely transparent and has never deviated from the legal path.

"Repeated accusations and repeated allegations against the Islamic Republic of Iran during the talks indicate their political targeting in the negotiations' process," he added.

The Iranian president said that the Islamic Republic of Iran considers unilateral sanctions as oppressive, illegal and unjust and is determined to defend its rights, adding, "All efforts should be directed towards the full lifting of sanctions with necessary guarantees in that regard."

President Rayeesi reiterated that a lasting agreement requires the lifting of sanctions and the unconditional abandonment of baseless claims.

Sheikh Tamim, for his part, appreciated the support of the Islamic Republic of Iran for his country, and said, "Doha supports Tehran's position in materializing its rights and advancing the talks, especially strengthening bilateral relations and cooperation, and welcomes Iran's initiatives for better holding of the World Cup in Qatar."

In a relevant development earlier this week, Iranian Foreign Minister Hossein Amir Abdollahian said that talks aimed at the removal of sanctions would lead to an agreement if the US refrains from raising excessive demands.

The Islamic Republic of Iran is determined to reach a good, reliable, and lasting agreement if the Americans avoid excessive demands, Amir Abdollahian said in a meeting with Turkish President Recep Tayyip Erdoğan in Ankara on Monday night.