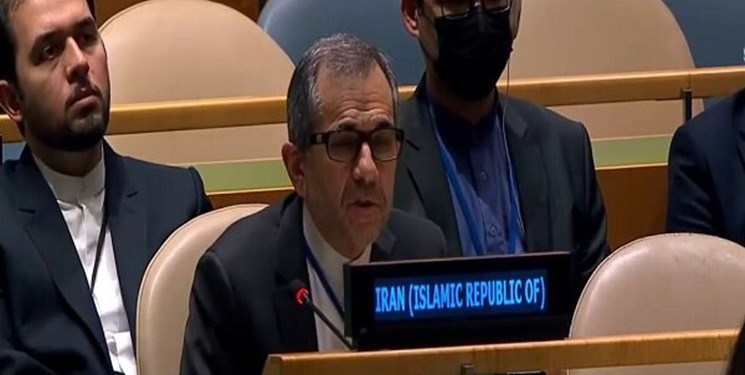 TEHRAN (FNA)- Iran' Ambassador and Permanent Representative to UN Majid Takht Ravanchi underlined that Tehran only favors a multilateral diplomacy that would guarantee effective and verifiable removal of unlawful sanctions imposed against the Iranian nation.

"We believe that JCPOA is a hard-won multilateral diplomatic achievement that remains the best option with no alternatives," Takht Ravanchi said before the United Nations Security Council on Non-Proliferation: implementation of UN Security Council resolution 2231 (2015).

He emphasized that that any multilateral agreement should guarantee and verify the removal of unlawful sanctions imposed against Iran.

The following is the full text of Takht Ravanchi's speech at the UNSC's meeting:

I thank you for convening this meeting and I also thank the USG and Ambassador of Irelands and the EU for their briefings.

Almost seven years after JCPOA’s conclusion and adoption of Resolution 2231, today the Council members once again reaffirmed their support for the restoration and full implementation of JCPOA.

We believe that JCPOA is a hard-won multilateral diplomatic achievement that remains the best option with no alternatives.

I feel compelled to refresh our memories about the reasons behind the current situation. Unfortunately, certain Council members that have disregarded their own obligations with regard to JCPOA and Resolution 2231, continue to ignore the underlying causes of the current situation and present a spurious narrative as to why we are here, attributing certain falsehoods and fabrications to my country.

The commitments under the deal, which have been carefully worded and explained in JCPOA and Resolution 2231, are explicit and unambiguous.

While Iran’s nuclear commitments were connected to the effective lifting of all sanctions and normalization of Iran's trade and economic relations, the sheer fact is that sanctions are still in place and Iran is not enjoying the economic dividends as promised in the deal.

In accordance with JCPOA, other parties are committed, and I quote, “to ensure Iran’s access in areas of trade, technology, finance and energy”, end of quote. Specifically, the United States, in addition to its obligation to lift sanctions against Iran, is explicitly committed to, and I quote, “make best efforts in good faith to sustain this JCPOA and to prevent interference with the realization of the full benefit by Iran of the sanctions lifting”, end of quote.

Despite these explicit commitments, Iran has been denied its rights and benefits for the past four years.

Let me remind ourselves that in defiance of Resolution 2231 and in flagrant violation of international law and the UN Charter, the United States withdrew from the agreement on May 8, 2018, and re-imposed unilateral sanctions that had previously been lifted, putting unparalleled pressure on other countries to either disregard their obligations under Resolution 2231 or face punishment. This is unprecedented in the history of the Security Council.

Despite the enormous difficulties we faced as a result of the sanctions, Iran decided to continue honoring its commitments, validated by the IAEA for 15 times, after being promised and assured by the European participants of JCPOA that they would compensate the losses Iran suffered after the U.S. withdrew from JCPOA.

Unfortunately, the E3 disregarded their obligations and promises, leaving Iran with no choice but to utilize its rights under paragraphs 26 and 36 of JCPOA to partially suspend its commitments on May 8, 2019.

In this context, Iran has taken certain remedial measures in accordance with JCPOA to re-establish some balance in the reciprocal commitments and benefits under the accord, however, these certain States refer, with much fanfare, to Iran’s remedial measures in a manner as if it was Iran that withdrew from JCPOA and re-imposed or introduced countless inhumane sanctions with the publicly declared objective of starving an entire nation.

While the former U.S. administration recklessly sacrificed a well-established tenet of international law and withdrew from the deal and re-imposed sanctions, the present administration is following in its predecessor’s footsteps as it continues to adopt the notorious maximum pressure policy and impose sanctions on Iran. There is no doubt that such a policy is advanced as a leverage in the negotiations.

Against this backdrop, I would like to address a few points that clarify our position on the current situation as well as the ongoing talks.

Iran is committed to multilateral diplomacy, the outcome of which should assure the effective and verifiable lifting of all unlawful sanctions.

Iran has demanded verifiable and objective guarantees from the U.S. that JCPOA will not be torpedoed again, that the U.S. will not violate its obligations again, and that sanctions will not be re-imposed under other pretexts or designations - as occurred during the previous U.S. administration - and that JCPOA mechanisms will not be abused. In fact, these are the minimum requirements for determining the deal's long-term viability.

In the course of Vienna talks, we exercised maximum flexibility and showed good faith in order to reach an agreement acceptable to all and even introduced innovative solutions to the remaining issues with the hope to break the impasse.

However, the United States' unrealistic and rigid approach has led to the current stalemate.

We are continuing our remedial measures because other parties' non-performance of commitments continues, sanctions remain in full force, the maximum pressure policy is still being pursued, and our people's sufferings continue.

Nonetheless, as soon as other parties fulfill all of their obligations in a complete, effective, and verifiable manner, Iran will immediately reverse all of its steps. However, the sufferings of our people as a result of other parties failing to perform their commitments are nearly completely irreversible.

Our patients, particularly those with rare diseases, have been suffering from inhumane sanctions which include even medicine and medical equipment. How can the deaths and sufferings of these innocent patients be reversed? This injustice cannot be erased from the Iranian people’s memory.

As a responsible member of the NPT, the Islamic Republic of Iran is committed to the principle of collaboration with the Agency and has fulfilled all of its obligations under the NPT and Comprehensive Safeguards Agreement, as the Agency continues its activities in Iran without hindrance.

Our peaceful nuclear program has been under the most robust and intrusive nuclear verification, monitoring, and transparency measures ever conducted in a country during the history of non-proliferation.

Iran also provided the Agency with the necessary information concerning the alleged locations on March 20, 2022, in compliance with the Joint Statement agreed upon on 5 March 2022 and within the timetable established.

Despite this unprecedented, strong, and proactive cooperation with the IAEA, the Agency's response was neither appropriate nor productive. Iran was surprised by the Agency's latest report on the issue because we have gone to great lengths to explain and clarify the remaining questions. We have responded to all of the Agency's questions in a thorough, constructive, and cooperative manner. We believe that the Agency's recent claims are based solely on erroneous and fabricated information provided by the Israeli regime who has done all in its power to kill the JCPOA.

Despite Iran’s constructive cooperation with the Agency, the US and the E3 pushed for the adoption of a resolution at the recent IAEA Board of Governors’ meeting. And their mere motive was to build up their negotiated position in the current talks.

We believe that the IAEA's resolution is politically driven and that it will have negative effects on the ongoing talks, the consequences of which will be the responsibility of the resolution's authors. This childish game must end.

As a result, in line with our Parliament’s resolution, we have decided to suspend certain measures that were not covered by the safeguards agreement. However, Iran is willing to continue engaging with the IAEA to address concerns and misunderstandings as long as the issues are technical and nonpolitical. The Agency needs to respect the principles of independence, impartiality, and professionalism in its work.

During our intensive consultations with the EU High Representative for Foreign Affairs and Security Policy, Mr. Joseph Borrell, in Tehran last week, Iran once more emphasized its willingness to provide creative solutions to the remaining issues in the hope of ending the deadlock. We agreed to hold indirect talks with the U.S. through the EU in order to overcome the last hurdles in the talks. We were sincere in the Doha talks that were serious and positive. As in the past, we will be in touch with the EU Coordinator for the next stage of the talks.

Our negotiating team is ready to engage constructively again to conclude and reach a deal. The ball is in US’s court and If the U.S. acts realistically and shows its serious intention to implement its obligations, the agreement is not out of reach.

However, we believe that the report should have addressed the root causes of the current situation around JCPOA, and focused on the United States' violations of UN Security Council Resolution 2231 (2015), which includes sanctions-lifting commitments.

According to certain paragraphs of the report, the Secretariat has continued to engage in unauthorized travel and verification visits as well as measures "to-examine" the allegations regarding the implementation of annex B to the resolution.

The Note by the President of the Security Council (S/2016/44) has elaborated the Secretariat's mandate on the implementation of resolution 2231 which is confined to "administrative support" for the Security Council. As a result, such ultra vires activities by the Secretariat are unacceptable and should be avoided. Similarly, any possible findings or assessments made by the Secretariat are rendered null and void. In this regard, any allegation that may be attributed to the Islamic Republic of Iran is hereby rejected.

In Conclusion, Mr. President, allow me to say a few words about the region.

First, we categorically reject baseless accusations and unfounded allegations made against my country at this meeting.

As a responsible State, Iran is committed to its international obligations and has never engaged in any activity that breaches its obligations including under Resolution 2231.

Our space and missile programs, fall outside the purview or competence of the Security Council resolution 2231 (2015) and its annexes and are not subject for negotiations.

Iran’s foreign policy is based on the full respect for international law, mutual respect, good neighborliness, cooperation, and dialogue, as well as maintaining regional peace and security through active participation of all regional States.

We are determined to pursue this policy in good faith. Our constructive engagement and efforts with the UN to assist and support the truce and its extension in Yemen stem from our firm belief that regional countries should work together to work toward a peaceful settlement of disputes.

The massive U.S. military build-up and export of sophisticated weaponry to the region, as well as certain European countries' supply of lethal weapons to regional countries, have transformed this region into the world's biggest concentration of foreign military installations, making it a ticking time bomb.

Another key source of regional insecurity is the Israeli regime's destabilizing, malicious, and terrorist activities in the region, which have always been accompanied by persistent US support.

The Israeli regime has used every opportunity to threaten and destroy the JCPOA as well as undermine the implementation of resolution 2231 by the UN Member States.

This regime has committed covert operations, subversive and disruptive measures against Iran's peaceful nuclear program as well as the cowardly and abhorrent assassination of innocent Iranian scientists to further its sinister objectives in the region.

It is regrettable that some Council members continue to modernize their nuclear arsenals, as recently reflected and acknowledged in a new SIPRI report. Instead of shedding crocodile tears about our current peaceful nuclear activities, they should adhere to their NPT commitments particularly those under article 6. Those States are also deafeningly silent about the Israeli regime's nuclear weapons as well as its repeated terrorist and disruptive activities against our peaceful nuclear facilities. It is high time to avoid double standards.

I thank you, Mr. President