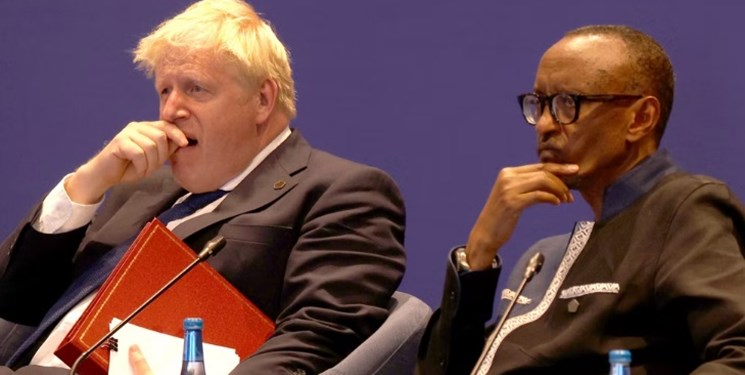 TEHRAN (FNA)- The government has been accused of an “outrageous” cover-up after refusing to reveal how much its plans to send asylum seekers to Rwanda will cost.

The Home Office claimed that it needed a “safe space” to negotiate agreements and releasing the actual or estimated costs of the scheme would “prejudice relations between the UK and Rwanda”, The Independent reported.

An initial £120mln payment has already been made to the country’s government and the Home Office has confirmed its intention to spend around £100,000 on publicising the deal to migrants in the hope of deterring small boat crossings of the English Channel.

A substantial amount of money is believed to have been spent on a deportation flight that failed to take off after legal challenges by migrants facing removal.

But the government refused to answer questions put to it in a Freedom of Information (FOI) request by The Independent on legal costs, the expected payments for each asylum seeker relocated or any other funding associated with the deal.

“Taxpayers’ money is being spent on a scheme that is unworkable, unethical, extortionate and risks making trafficking worse. The British people have a right to know what the total cost is going to be,” she told The Independent.

“For the Home Office to claim these figures aren’t in the public interest is total rubbish and shows just how out of touch they are with the public, who will want to know how their money is being spent, especially during a cost of living crisis,” she added.

The government also refused to answer a separate FOI request from The Independent on the costs of its failed policy to push back migrant dinghies in the English Channel.

The plans were dropped in April, days before a judicial review of the tactic was due to be heard by the High Court.

The Home Office put the decision down to the Ministry of Defence’s assumption of responsibility for Channel operations, but the navy has no plans to resurrect the policy.

It said it could not answer questions on the amount of public money spent on training, equipment and legal costs relating to push-backs because it would be too expensive to calculate, exceeding the £600 limit under FOI laws.

Cooper said Labour had made separate requests to the government for details of costs relating to the Rwanda agreement, but had been “completely refused”.

“[Home Secretary] Priti Patel should drop this extortionate plan and focus instead on cracking down on criminal gangs and speeding up asylum decisions, which have collapsed on her watch,” she added.

“The British public deserve better than her unworkable schemes,” she said.

The UK government will be paying Rwanda to support the delivery of asylum operations, fund accommodation for people sent from the UK and schemes to help them integrate into the country.

Conservative MPs have voiced concerns over the “eye-watering costs” of flying asylum seekers 4,000 miles to Kigali, but ministers have told parliament that the costs of the existing UK system are “soaring”.

Delays in the processing of asylum applications have left tens of thousands of people being housed in hotels, at a cost of almost £5mln a day.

In an official response to The Independent’s FOI request, the Home Office said it would not be “appropriate” to share the assessment that resulted in its permanent secretary refusing to sign off the proposals because of concerns about value for money.

Patel used a rare ministerial direction to force the policy through after Permanent Secretary Matthew Rycroft warned, “I do not believe sufficient evidence can be obtained to demonstrate that the policy will have a deterrent effect significant enough to make the policy value for money.”

It claimed the secrecy was necessary to “protect good government by preserving a safe space to negotiate bilateral agreements and the associated financial parameters of commercially sensitive arrangements”, “protect the integrity of the policy-making process” and avoid prejudicing relations between the British and Rwandan governments.

“If the UK does not maintain this trust and confidence, its ability to protect and promote UK interests through international relations will be hampered and [it will] potentially damage the bilateral relationships we hold with other governments, which will not be in the public interest,” the Home Office added.

“Disclosure may prevent important policy issues and proposals from being thoroughly explored, interfering with future negotiations on other issues, resulting in less robust, well-considered or effective policies,” it added.

The government also refused to disclose how much it had shelled out in legal costs responding to a wave of challenges against the policy by individuals threatened with removal to Rwanda.

A Home Office spokesperson said, “The Home Office is committed to being open and transparent through regular publication of data on the immigration system, including costs. Some of this requested information will be made public through published data."

“The costs of our broken asylum system are at a 20-year record high, currently costing the UK taxpayer over £1.5bln a year, with £5m a day being spent on hotels alone," the spokesperson added.