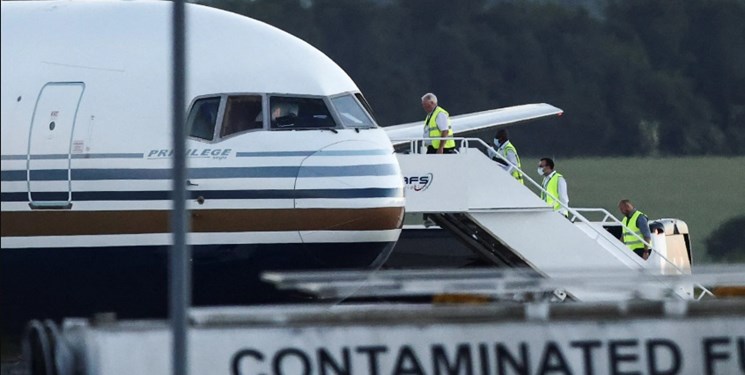 TEHRAN (FNA)- The Home Office is planning a second flight to deport asylum seekers to Rwanda, which could take off before the courts have ruled on whether the scheme is lawful, according to a report.

It is understood that a second flight could take off in a matter of weeks despite the fact that the full high court hearing to examine the government’s Rwanda plans does not begin until July 19, The Guardian reported.

Home Office sources said they would not comment on operational matters or speculation.

During an earlier high court hearing, the charities Detention Action and Care4Calais, the PCS union that represents about 80% of Home Office Border Force staff, and several individual asylum seekers threatened with removal to Rwanda unsuccessfully made an urgent application to the judge to halt the first flight, which was due to leave on June 14.

The flight was subsequently grounded after an interim 11th-hour intervention from the European court of human rights.

During the court hearing, the judge in the case, Justice Swift, asked the Home Office Counsel Mathew Gullick QC whether the Home Office was planning any further flights to Rwanda in the near future.

Gullick replied, “The Home Office intends to make arrangements for further flights this year. There may be a further flight scheduled between now and July. It will require approval from the Rwandan government.”

The organisation Stop Deportations posted a message on social media on June 24 stating, “We have heard that the Home Office has started to detain dozens of people to deport them to Rwanda.”

After the European court interim measure grounded the June 14 flight, the Home Secretary, Priti Patel, said she was disappointed by the legal challenge, criticised the ECHR ruling and said the policy would continue.

“We will not be deterred from doing the right thing and delivering our plans to control our nation’s borders,” she said, adding, “Our legal team are reviewing every decision made on this flight and preparation for the next flight begins now.”

It is understood the Home Office has made submissions to the European court to set aside the interim ruling.

When The Guardian asked the European court about the procedure when considering such submissions, a spokesperson said, “An interim measure decision can be reviewed at the request of one of the parties. An interim measure would usually only be lifted if the court was satisfied that there was no imminent risk of irreparable harm to the applicant. That test would normally be satisfied in an expulsion case if either a) there was no imminent risk of expulsion, or b) the court was satisfied that if expelled, there would no longer be a real risk of irreparable harm.”

A Home Office spokesperson said, “We remain committed to our world-leading migration partnership with Rwanda, which will see those arriving dangerously, illegally or unnecessarily into the UK relocated to rebuild their lives. This is vital to prevent loss of life in the Channel and break the business model of people smugglers. Preparations for the next flight are under way.”

Home Office sources added, “No court has actually ruled that this partnership is unlawful, and that includes the European court of human rights.”