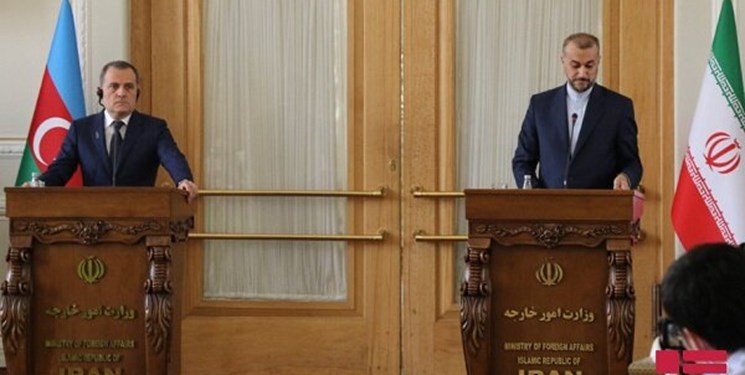 TEHRAN (FNA)- Iranian Foreign Minister Hossein Amir Abdollahian said on Monday that Tehran and Baku have passed a season of misunderstandings and are now developing their relations in all fields.

"Last spring, we passed the stage of misunderstandings and now we are in the phase of increasing development of all-out relations in line with the interests of the two countries," Amir Abdollahian said in a joint press conference with his Azeri counterpart Jeyhun Bayramov in Tehran on Monday.

He also stated that the trip of the Azeri President to Iran will be discussed between the Iranian and Azerbaijani sides later on Monday.

Turning to the issue of electricity exchanges between Iran and Azerbaijan, Amir Abdollahian said that the two sides have reached some agreements that would be finalized during the visit of the Iranian energy minister to Azerbaijan.

Noting that the Aras River's environmental issues were also discussed with the Azeri side, the top diplomat stressed the importance of implementing the existing projects as well.

"We are pleased to see a leap in the volume of trade between the two countries in the past months, and we hope that with today's talks, the commercial and economic areas in the private and public sectors will expand relations," he said.

The Iranian top diplomat elaborated on his meeting with Bayramov earlier today, and said that a variety of issues were discussed between them including developing Tehran-Baku ties and cooperation and preserving the territorial integrity of countries.

Saying that the peaceful settlement of the Karabakh conflict was another topic emphasized during their meeting, Amir Abdollahian stated that from the beginning of the conflict, Iran announced its readiness to resolve the crisis through dialogue.

"We are ready for the remaining issues to be resolved based on respect for the territorial integrity and sovereignty of the parties and through dialogue and diplomacy," he added.

Noting that it is important to consider the regional formats, the Iranian top diplomat said that during his last week's trip to Ankara, he and the Turkish foreign minister agreed on holding a tripartite meeting of Iran, Azerbaijan, and Turkiye in Tehran at the level of foreign ministers.

Bayramov, for his part, said that the Iranian and Azeri sides have reached agreements on joint production of cars and tractors.

He also added that Azerbaijan is ready to increase the capacity of the North-South corridor and implement its commitments regarding the construction of the Rasht-Astara railway, noting, "We entrusted the construction of a hospital and a school to Iranian companies."

Stressing that his country aims to normalize relations with Armenia, the top Azeri diplomat said, "We announced our readiness to reopen transportation and international communication between Azerbaijan and Armenia."

"Azerbaijan has taken steps in this regard, and we presented Armenia with the five main articles that will help to sign the peace document between the two countries," he added.

"We also announced our readiness to reopen road transport and inter-regional communication in Azerbaijan and made suggestions about the delimitation of the border between Armenia and Azerbaijan," Bayramov continued.

Elsewhere in his remarks, he referred to his meeting with Iranian Parliament Speaker Mohammad Bagheri Qalibaf, saying that he was scheduled to meet with the Iranian President Seyed Ebrahim Rayeesi as well.

"We also agreed to follow up on the completion and exploitation of half-finished joint projects and to define and implement new projects," Bayramov added.

Turning to the project of connecting Zangezur to Nakhchivan via Iran, the Azeri top diplomat announced that in the near future, the construction of the first bridge in that area will begin and the necessary coordinators will be introduced.

"We welcome Iran's constructive stance in participation and cooperation in regional forums, including the 3+3 mechanism, and Iran will host a meeting of the 3+3 mechanism in the near future," Bayramov said.

President Rayeesi in a message to his Azeri counterpart Ilham Aliyev in May called for the expansion of mutual cooperation between the two countries in different fields.