Iranian President Calls for Leap in Development of Ties with Azerbaijan 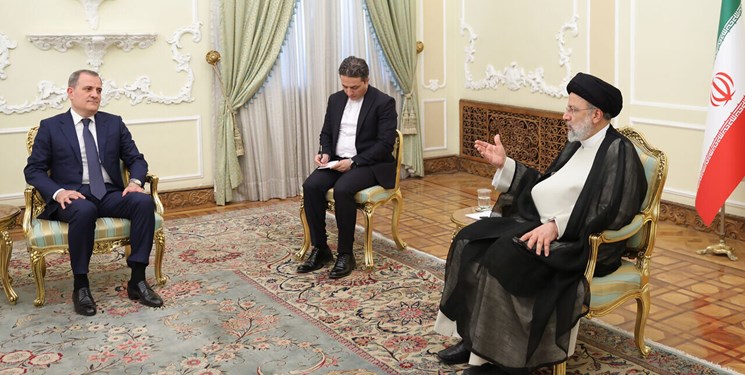 Increased diplomatic exchanges and consultations between the two countries will have a positive impact on the expansion of Tehran-Baku relations and cooperation in various trade, economic and political fields, Rayeesi said during the meeting in Tehran on Monday.

He stressed that there are no limits for the development of Iran’s relations with the Republic of Azerbaijan, adding, "Promotion of bilateral relations can lead to effective regional cooperation.”

Rayeesi expressed the hope that the two countries would witness a leap in the development of relations after an expected visit by Azerbaijan's President Ilham Aliyev to Tehran.

Bayramov, for his part, said officials of the two countries have increased the exchange of their diplomatic visits in recent years.

He added that the trade volume between Iran and Azerbaijan showed a significance raise in 2021 and the first five months of 2022.

Bayramov emphasized that both Iran and Azerbaijan believe that regional issues must be settled by regional countries without interference of foreign powers.

The Iranian and Azeri presidents held a meeting on the sidelines of the 6th summit of the heads of the Caspian Sea littoral states in Ashgabat, Turkmenistan, late last month.

During that meeting, Rayeesi warned of the Israeli presence in the region, saying it only stokes tensions. He also noted that the occupying regime undermines security wherever it manages to gain a foothold.

“The presence of the Zionist regime in any environment undermines security there,” he said, adding that security in the region can be achieved only through cooperation of regional countries and Caspian Sea neighbors.